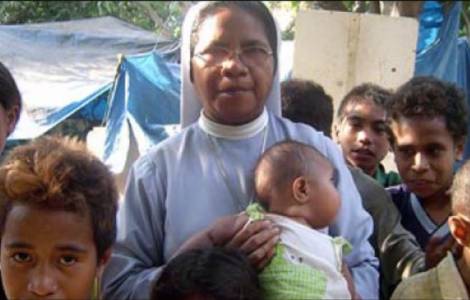 Dili (Agenzia Fides) - "We have inaugurated a period of political stability. This is a good omen. In this phase, as in the past, the Catholic Church will make its valuable contribution to the spiritual, cultural, economic and social growth of the nation. The Catholic Church is inseparable from the history of our small nation, which is 98% Catholic, out of a population of 1.3 million. We can say that the Gospel is that spiritual and ideal heritage that has impregnated and permeates our national life, and is well present in the collective conscience": this is what Father Bento Barros Pereira, priest of Dili and National Director of the Pontifical Mission Societies in East Timor, told Fides. In the small Catholic nation of Asia, the newly-elected President Jose Ramos-Horta took office and, on May 20, East Timor's Independence Day, began his mandate. The new president, awarded the Nobel Prize in 1996, obtained 62.1% of the votes in the elections last April, supported by the "Congresso Nacional de Reconstrucao de Timor" (CNRT) political party. President Horta said that he "will respect the Constitution and guarantee freedom of expression and religion." In addition, he has pledged to make East Timor a new member of ASEAN, the Association of Southeast Asian Nations, to boost the country's growth. Speaking to Agenzia Fides, some Indonesian missionary nuns who live in Dili and Baucau, recount the strong enthusiasm that exists among the Timorese for the new political season: "I have been on mission here since 2016 to serve in the health sector", remarks Sister Elfina, a Franciscan nun originally from Semarang, in Central Java. "It is really urgent that the health service can develop in East Timor, and we offer our contribution in the care of those who suffer and in running hospitals and dispensaries", she points out. In Baucau, Sister Tina is in charge of the educational service at the facilities of the Ursuline Order. The nun hopes that "more and more secondary and preparatory schools will be established in rural areas to face the educational urgency in these areas." Other problems mentioned are the lack of means of transport and communication infrastructure, a problem faced by the Sisters of Charity of San Carlos Borromeo de Manulete, sent on an evangelizing mission to this inaccessible mountainous region of East Timor since the beginning of February 2022. Sister Imelda, who, along with another sister, serves in Manulete (70 km south of the capital Dili), hopes that the policy can give a boost and resources to civil society and Catholic religious communities to support their valuable work of integral human development, especially with children and young people. (MH/PA) (Agenzia Fides, 1/6/2022)