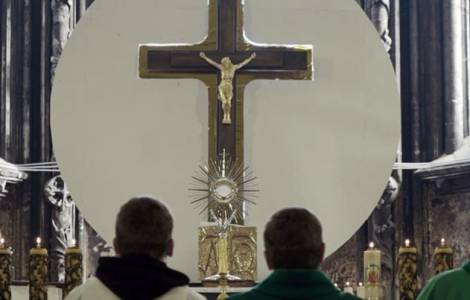 Kiev (Agenzia Fides) - "Now that there is war, the Oblates of Mary Immaculate (OMI), who have been in Ukraine for 32 years, have not left the country and their pastoral service. Neither from Kiev, which was surrounded by Russian troops for a month, nor from Chernihiv, where the Oblates, together with the more than 70 people who approached the community, lived for more than a month in a bunker, under the church. The city was surrounded, there was no water or light; and it was March, it was cold and there was no food. The Oblates did not leave the people, even though they could have left the city": this is what Father Pavlo Vyshkovskyy, missionary of the Oblates of Mary Immaculate (OMI) in Kiev, tells Fides.
"In another community, in Tyvriv - continues the missionary - the OMI welcomed ninety people from Kharkiv, from the war zone, who had lost everything. They have been supporting these refugees for over two months. We in Kiev, in our parish of St. Nicholas, have created a kind of warehouse for the whole area, and we have sent seven vehicles with aid throughout the Kiev region and also Chernihiv, not only in the cities, but also in the villages where for the first time, after more than a month, people saw bread.
At first it was very difficult because when Kiev was surrounded the shops were closed, and you had to queue for hours just to buy bread. Now the war has moved to the eastern part of the country. We have brought aid to Kharkiv, Mykolaiv, Mariupol, with aid, food, and we send everything possible to these people who are now suffering". All this, Father Pavlo points out, "is possible thanks to the solidarity of the OMI confreres all over the world. They sent a lot of aid from Poland, but also from Italy, from friends of the Missions, but also from parishes we know. We need your prayers, because the war has disfigured our country for two months. We are grateful for the help we receive and above all for the prayers that support us".
The first OMI missionaries arrived at the very end of the Soviet Union, thirty-two years ago. Now in Ukraine there are nine religious communities of the OMI, mostly engaged in parishes, also operating in the Chernobyl area and in Crimea.
The missionary concludes: "We have done a lot of pastoral work, because after the USSR the structure and the network of parishes had been almost destroyed. In Kiev, in addition to the church where I am a parish priest, in the parish of St. Nicholas, we have a community that evangelizes through the mass media. We have a television network and also a press agency to bring the proclamation of the Gospel to all those who, especially recently due to Covid and now because of the war, cannot be contacted otherwise. Other OMI missionaries work with the poor: in Kiev we have six houses where in the last nine years many people, about four hundred every week, receive both material and spiritual help. Pope Pius XI called the Oblates the 'specialist fathers of the most difficult missions', and we go where no one else wants to go. We are there". (PA) (Agenzia Fides, 2/5/2022)