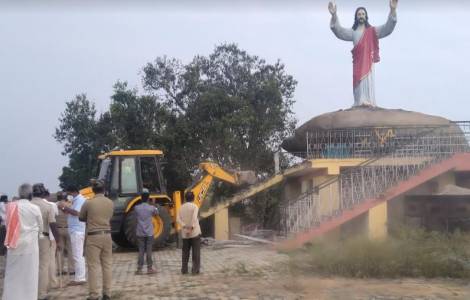 Kolar (Agenzia Fides) - The authorities of the district of Kolar, in the Indian state of Karnataka, have given the order to demolish a statue of Jesus Christ, erected 18 years ago in the village of Gokunte.
As confirmed to Fides by the local Church, the demolition order was carried out on February 15, in the presence of representatives of the civil authorities, police officers and the local population. According to the demolition order, the statue had been built on state land, set aside as pasture for animals. The responsible official explained: "We have demolished the statue based on the High Court order, which confirmed that it was built on government land".
However, Christian leaders in the region say the statue was illegally demolished while the case was still pending in court. The Catholic community had opposed the demolition. Speaking on the matter, Father Theres Babu, a priest and lawyer, said that "the demolition letter has never been notified or shown to us". According to the priest, a new hearing on the case was set for February 16. One of the local faithful, Rayappa, explained to Fides: "Last night, for the demolition, there were more than 400 policemen. We have been praying in front of the statue since 2004. They did not even listen to us and they simply destroyed it with bulldozers. We had built it thanks to a small fundraising effort among the villagers". According to the inhabitants, some members of a radical Hindu organization wanted to create tension in the region and filed an appeal with the High Court, demanding the demolition of the statue. Priests at the nearby Church of St Francis Saverio say the entire community is in shock after the demolition. "For several decades, we have had written consent from the authority to use the approximately 300-acre land where the statue stood, while continuing to carry out pastoral and social activities. But two years ago a member of a Hindu group filed an appeal to the High Court, challenging our use of that land".
The statue of Jesus was built on a hill overlooking the village of Gokunte which has a population of 500-600 people (more than 100 families), almost all of them Catholic. The church of St Xavier in Gokunte is one of the oldest Catholic presences in the Kolar district. The parish was entrusted to the Missionaries of Saint Francis de Sales in 1977. In the parish there is also a home for poor children, a pilgrim's house and many other social promotion activities, such as vocational training centers for women (tailoring school) and an English school for children. (SD-PA) (Agenzia Fides, 16/2/2022)