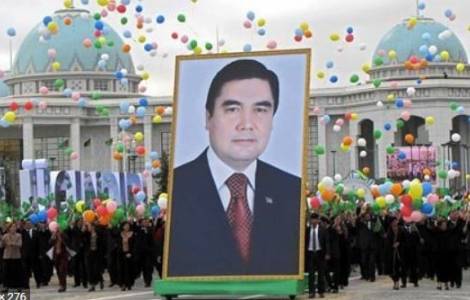 Ashgabat (Agenzia Fides) - The announced resignation of Turkmen President Gurbanguly Berdymukhamedov, with the consequent early presidential elections and the foreseeable rise to power of the son of the same leader, Serdar Berdymukhamedov, now deputy prime minister, should not cause a great upheaval in the political landscape from Turkmenistan. Davide Cancarini, researcher and expert on Central Asia, explains to Agenzia Fides: "It is very likely that the regime will not be shaken. On the other hand, Serdar Berdymukhamedov grew up in the shadow of his father, and the management will continue unchanged, at least initially. This is a potential headache for Russian leader Putin, who is well aware that running nations ruled by regimes like Turkmenistan requires experience and full domestic support".
The news of the early elections was released by the Electoral Commission of Turkmenistan, which set March 12 as the date of the vote.
According to Cancarini, this is important news for the region, but "it is very unlikely that a scenario of protests such as those seen in Kazakhstan or Kyrgyzstan in recent months will be repeated. In Turkmenistan, in fact, there are no conditions to organize protests, for various reasons: first of all, there are few Turkmen, the country is large and poorly connected, so it is difficult to organize demonstrations. The only populated center is Ashgabat, the capital, which remains under tight control, reinforced after the chaos that broke out in Kazakhstan in early January". The reasons that have led Gurbanguly Berdymukhamedov to resign are still not clear: "Some say that the president has been suffering from health problems for years. Others believe that he was moved by the fear that, sooner or later, the internal situation, although under the heel heel of the regime, could get out of hand: the economic crisis, in fact, is really hitting hard".
According to local sources, Berdymukhamedov's election was motivated by the desire to hand over the country's leadership to "young leaders raised in a spiritual environment and according to the high demands of modernity". Described by local media as the "Son of the Nation", Serdar Berdymukhamedov, 40, has been a member of parliament since 2016 and also holds the positions of deputy prime minister, deputy foreign minister, governor of Akhal province ( the capital), Minister of Industry and Construction, President of the Court of Auditors and member of the Security Council. Turkmenistan has 5 million inhabitants, 90% of whom are Muslim. The local Catholic Church was reborn with the Missio sui iuris established by John Paul II in 1997 and today consists of about 250 faithful, who gather in the chapel of the Transfiguration of the Lord, in the capital Ashgabat. (LF-PA) (Agenzia Fides, 15/2/2022)