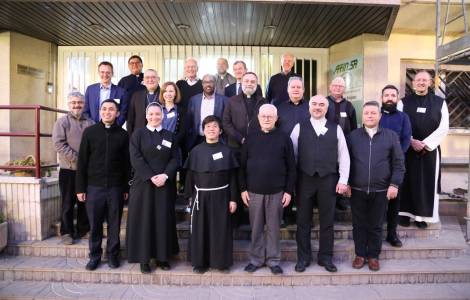 Madrid (Agenzia Fides) - "Paulina Jaricot is a source of inspiration for us today", said Father Tadeusz Jan Nowak, OMI, Secretary General of the Pontifical Society for the Propagation of the Faith, during the meeting of the European Directors of the Pontifical Mission Societies (PMS) which was held during the week in Madrid and ended yesterday morning with the celebration of Holy Mass.
Presenting a report on "The nature and charism of the Pontifical Mission Societies, their place and mission in the universal Church and in each local Church", Father Nowak explained that the charism is at the service of the communion of the Church ("there are many charisms, but only one Spirit"), and that it must be based on love.
"We may have brilliant ideas to raise funds, but if we do not have love, it is useless", Fr. Nowak commented, noting that the person's God-given charism must be understood in depth. This is why the Pontifical Mission Societies are called to relive the charism of Paulina Jaricot. "This French laywoman received a charism as a result of her profound conversion; after having suffered so much, she opened herself to the mystery of God's love", explains Father Nowak. "Also, listening to her seminarian brother preparing to go on a mission speak about the difficulties of evangelism, she felt deeply that she had to do something". The Secretary General of the Propagation of the Faith insisted on some enlightening traits of Paulina. On the one hand, she had a great zeal for evangelization, to the point of not being able to stay in place; on the other hand, this zeal was based on prayer, which rooted her deeply in Christ. And finally, she was convinced that we can all share what we have, both spiritual and material goods. In this context, looking at the National Directions of the PMS, Fr. Nowak warned against the risk of forgetting her founding charism. "The PMS are not a fundraising agency or an NGO, it is not their charisma", underlined the Secretary General of the POPF. It is about praying for the mission and sharing the goods so that the Church can take root in the world". For this reason, Father Nowak invited the national directors not to look at themselves and their problems, but to connect to what Paulina Jaricot wanted, to make the charism alive, she encouraged them to be creative and to create networks in the local Churches, involving lay people and religious.
Thursday, February 10 continued with a visit to the Spanish Bishops' Conference, where the Eucharist was celebrated and presided over by Monsignor Francisco Pérez, Archbishop of Pamplona and President of the Episcopal Commission for the Missions, and in the afternoon space was dedicated to sharing of experiences and formulating conclusions. The directors also had the opportunity to visit the city of Madrid and learn more about the work carried out in the offices of the Spanish PMS, the people who work there and the most developed areas. They had the opportunity to deepen their understanding of how missionary animation and awareness are carried out by listening directly to the voices of those responsible for the missionary days that are celebrated in Spain, and also how the work of the diocesan Directors of the PMS present in 69 dioceses is structured. (EG) (Agenzia Fides, 12/2/2022 Agenzia Fides)