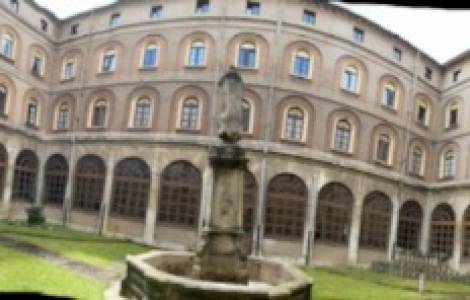 Rome (Agenzia Fides) - The Academic Day on "The Evangelizing Mission of the Church", promoted by the Faculty of Theology of the University of Navarre, was held today at the University of Navarre. Father José M. Calderon Castro, National Director of the Pontifical Mission Societies in Spain, spoke on the theme "Mission in the Church, perspective for the future", then followed the report by Archbishop Giampietro Dal Toso, President of the Pontifical Mission Societies, on "Theological Principles for Missionary Action and for the Pontifical Mission Societies". From March 9 to 13, promoted from the Faculty of Theology of Northern Spain, the 30th Symposium of Missiology on the theme "A Synodal Church in Universal Mission", which has the subtitle "Accepting, enduring conflict, resolving it and transforming it" will be held in Burgos (cf. EG 227).
The works will be opened on the morning of March 9, by the Archbishop of Burgos and Grand Chancellor of the Faculty of Theology in the North of Spain, Mgr. Mario Iceta Gavicagogeascoa. After the presentation of the Symposium, Msgr. Giampietro Dal Toso, President of the Pontifical Mission Societies (PMS), will intervene on the theme "Before the Synod of Bishops (2023), the interpellations from and for the mission" and of the Professor of Dogmatic Theology, E. Bueno de la Fuente, on “Synodality, an ecclesiological and missiological paradigm”. The afternoon will be dedicated to a round table on the “universal mission from synodality” with the interventions of Fr. José M. Calderon Castro, National Director of the PMS in Spain; Maria del Prado Fernandez Martin, Comboni missionary, coordinator in the central area of the Mission Animation Service (SCAM), and Jesus Santiago Vazquez, delegate of the Missions of Lugo.
On Thursday, March 10, the two interventions in the morning will be given by F. Susaeta Montoya, Co-director of the Institute of Missiology of Burgos, on "The synodal caress of conflicts" and by R.Calvo Perez, Director of the same Institute, on "Evangelical-synodal discernment of certain Churches on mission". In the afternoon, the round table on missionary commitment in times of pandemic, with the intervention of the Social Action Coordinator of Caritas of Burgos, Maria Gutierrez Pulgar; by Luis Carlos Rilova Hurtado, a priest from Burgos, member of the IEME, and by Eliete Lopes Cerqueira, a lay Brazilian.
The conclusion of the Symposium will take place on Friday, March 11, with the report on "The mission of the Church in the midst of world conflicts" by Maria Carmen Marquez Beunda, of the Faculty of Theology of the Comillas University, and a second report which on "A missionary spirituality in times of conflict", by the Provincial Superior of the Spiritan missionaries in Spain, Fr. Eduardo Tchapeseka. (SL) (Agenzia Fides, 8/3/2022)