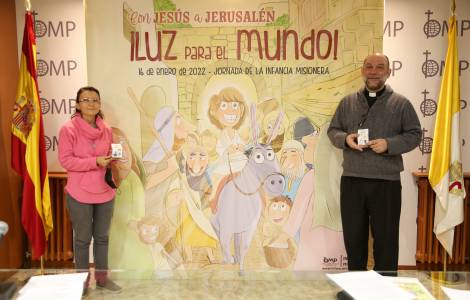 2022-01-13
Missionary Childhood Day: The Church has been a pioneer in the field of child protection for many years

2021-12-18
The "Star Sowers": the announcement of Christmas made by the little ones and the "gratitude" of the missionaries

2021-10-23
Towards Mission Sunday: promoting the mission of the Church through the witness of young people

Madrid (Agenzia Fides) – This coming Sunday, January 16, Spanish children have an appointment with Missionary Childhood Day - "Children's Sunday". The focus is on supporting the missionaries in their work with children. "Missionary Childhood is not an NGO that does nice things for children, but an instrument of the Church so that the churches in the mission areas have the means to look after the children locally", explains the National Director of the Pontifical Mission Societies in Spain, Fr. José María Calderón, presenting the initiative that was launched in 1984. At that time, the campaign was a pioneer in the field of child protection and anticipated the Geneva Declaration of Children's Rights by years. As Fr. Calderón commented, "the Church is ahead because caring for children has always been very important".
The National Director of the Pontifical Mission Societies recalls that thanks to the funds raised by
Missionary Childhood - mainly through donations from children - it is possible to support projects of evangelization, education and health of children and their mothers so that they can be born with dignity and grow up, eat well and learn. In 2021, the initiative raised € 1,933,313.21 and supported more than 300,000 children in 34 countries. "For many children, the church is the only place where they can find a home", emphasizes the Catholic priest.
As an example, the Brazilian missionary sister Sofía Quintans reports from the Franciscan Sisters of the Mother of the Divine Shepherd how the Church accompanies the Venezuelan refugees, many of whom are children, on their arrival in Brazil. The nun has been living and working in Boa Vista for three years and takes part in "Operation Welcome", which sees itself as an answer to the humanitarian emergency. In coordination with the state, the United Nations and various aid agencies, the Catholic Church accompanies these people in the refugee shelters. In Boa Vista there are 13 camps with 700-1,000 people each. The refugees are temporarily taken in there so that they can integrate into normal life. "The Venezuelans carry a rucksack full of suffering with them," explained the missionary sister, who especially remembers the plight of the children. "The stressful situation of their parents weighs on them, they are sponges", these children live "stolen childhoods", "they want to play, but they cannot". "That is why we try to create safe spaces for them to keep playing and be able to learn, even if it is not easy", says Sister Sofia. In addition to child trafficking, the theft of babies for the purpose of organ transplants and sexual exploitation, there is currently the pandemic and its consequences.
The children therefore have an appointment this Sunday with Missionary Childhood: they are invited to color and assemble a "piggy bank to share", in which they will put their donations for the children in the missions. They receive instructions for this at Sunday masses, in school or in the mission groups. In addition, all children are invited to take part in the 9th National Painting Competition of Missionary Childhood, whose motto this year is: "With Jesus in Jerusalem ... light for the world!" The adults are also invited to join the fundraising campaign so that the missionaries have the means to continue their work for the children: building schools in the most remote places, opening orphanages, providing medical care and much more. (SL) (Agenzia Fides, 13/1/2022)

AMERICA/CHILE - Pastoral agents at the service of the mission: the formation carried out in the diocese of Chillán concludes