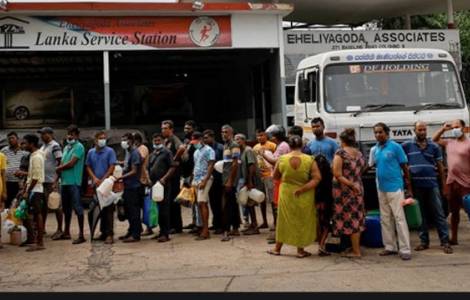 Colombo (Agenzia Fides) - "The situation in Sri Lanka continues to deteriorate and this threatens social instability. There is a lack of basic services, food and fuel. The crisis is worsening and people are suffering, there are no jobs, no wages. We need the help of international institutions", says to Fides Fr. Basil Rohan Fernando, priest of the Archdiocese of Colombo and Nation Director of the Pontifical Mission Societies (PMS) in Sri Lanka.
The country is in the midst of its worst economic crisis since gaining independence from Britain in 1948. "Survival will be difficult for many," the Catholic priest continued, "because there are no raw materials. Against the background of a serious crisis, the Church is trying to show solidarity and closeness to those in need as much as possible. The network of the papal ones too. Mission organizations around the world are doing their part. We must not let our people die. We want to make a material contribution, but also a spiritual one, and offer the consolation of faith. God does not abandon his people who are in need". For us, this moment of trial," said Father Fernando, "is a transition towards unity. We must not be selfish, but are called to share. We hope and pray that this unfavorable situation will pass and that there will be a recovery. This difficult time is also an opportunity for us to evangelize and proclaim the good news that God loves and cares for every person". Sri Lanka is mired in a complex economic crisis, exacerbated by insecure food supplies and scarcity of raw materials, threatening lives and livelihoods, according to the United Nations, which has requested $47.2 million for urgent assistance to the country. Meanwhile, the United Nations and other partners have drawn up a joint humanitarian priority plan to help at least 1.7 million people hardest hit by the economic crisis. This assistance aims to meet the most pressing needs, with a focus on health care and essential medicines, food and agriculture, including targeted nutrition programs, safe drinking water and livelihoods. According to the UN in Sri Lanka, around 5.7 million citizens in 25 districts of the country are in need of immediate humanitarian assistance. UN Coordinator in Sri Lanka Hanaa Singer-Hamdy stressed: "Sri Lanka's health system is at risk; the lack of social assistance has the greatest impact on the most vulnerable". Economic and financial troubles began in 2019 with rising national debt, exacerbated by the collapse in tourism as a result of the pandemic; rising food and energy prices in early 2022 - exacerbated by the war in Ukraine - led to a serious debt and balance of payments crisis. Rising inflation and the devaluation of the currency (which has depreciated by 80% since March) have brought the country to the brink of collapse, while the population has accused the Rajapaksa family-led government of corruption: Prime Minister Mahinda Rajapaksa resigned to calm widespread protests, while President Gotabaya Rajapaksa has announced that he will complete the remaining two years of his term but will not stand for re-election. (PA) (Agenzia Fides, 14/5/2022)