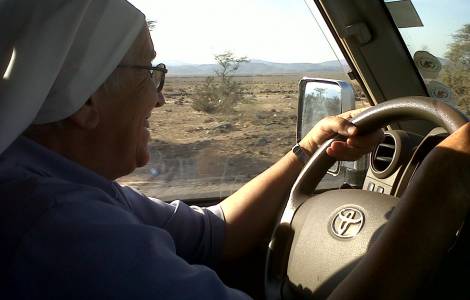 2021-01-27
The pandemic increases the vulnerability of street children: the Church offers hospitality

Djibouti (Agenzia Fides) - "It is a small, fragile Church, but strong in the light of the Gospel that cannot be announced verbally, being an Islamic country, but lived. Certainly the Christians and the sisters who live there are a small but significant presence". Sister Simona Brambilla, Superior General of the Consolata Missionaries (MC), a congregation that has been working in Djibouti with a mission opened in 2004, says this in a conversation with Fides.
On the border between Ethiopia and Somalia, Djibouti is a desert land that is home to different ethnic groups, and where the Church has done so much in terms of dialogue while respecting differences. Just a few days ago, Mgr. Giorgio Bertin, Bishop of Djibouti, Apostolic Administrator of Somalia, gave an interview to Catholic weekly “La difesa del Popolo”.
The Bishop, speaking of the geopolitical situation in Somalia and the work of the Church, recalled how the Church in Djibouti was even ahead of its time, as in the case of action in favor of people with disabilities, who until a few years ago were kept segregated at home.
In this way, over time, a state agency was born that is responsible for their care and promotion, along with missions such as the one that Sr. Anna Bacchion MC, in Djibouti since the foundation of the mission in 2004, who explains to Fides this inclusive project called “École pur tous”: "In 2013 an inclusive school for physically and mentally disabled children began. This project was conceived and implemented by the Church of Djibouti. Now, after years of intense work, several children have been admitted to both public and private primary schools. Their families have understood the importanceof this school. Before, their children, because they were disabled, remained locked up, hidden in their huts, and now they are free and more sure of themselves, because, like other children, they know how to write and read. Our children leave this school with the conviction that they know how to do good things. This program began as a small seed, but has now developed and has also been adopted by the government which wants to extend it to all schools to facilitate the insertion of disabled children in public schools". Sr. Anna, who had already had a missionary experience in Libya in a Muslim context in 1976, describes both experiences as positive and enlightening to understand a fact: the dialogue of life must infect and spread the values of reception and tenderness. "In Djibouti, since 2004 - concludes the nun - I started a simple dialogue, a dialogue that silences itself in order to listen, trying to enhance the good present in the other, a dialogue that seeks to emanate the fragrance of Christ. I did not find it difficult to enter into dialogue with the poor of our villages and also with adults. My people are people who believe, who pray, who celebrate festivities, who rejoice, who suffer and who often only want our closeness to share their joys and their difficulties". (EG) (Agenzia Fides, 15/12/2021)