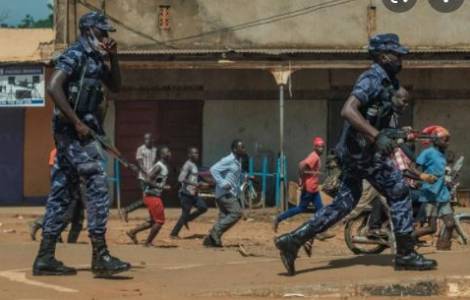 2022-11-07
Fighting pride and selfish interests and living a life full of humility, forgiveness and mutual love

2022-10-25
Resignation and Appointment of bishop of Kotido

2022-10-21
Ebola, malnutrition, illiteracy: Camillian religious health centers at the service of the poorest

2022-10-11
60 years of independence: bishops look back on developments over the past ten years

Kampala (Agenzia Fides) - "The situation in Kampala is very tense, residents have been told to avoid the city center and stay at home if possible. The security forces are trying to get the situation back under control, but there are fears that the rioting will increase and a bloodbath could be unleashed. At the moment (on the evening of November 16, editor's note) there are 33 confirmed injuries and 3 dead (including two bombers who blew themselves up on two motorcycles, editor's note); some of the injured, five according to the latest estimates, are in critical condition". Sister Lilly Driciru, of the Missionary Sisters of Mary Mother of the Church, Communication coordinator at the Conference of Consecrated Persons in Uganda, spoke to Fides from the capital of Uganda. The country has been shaken by a wave of violence that has hit the symbolic places of political institutions and security with a double attack.
"The explosions occurred on the morning of November 16 near the police headquarters and parliament", Sister Lilly continues, "People are placing their hopes in the security forces and their ability to bring the situation under control as soon as possible. Two weeks ago, the police intercepted and defused 47 bombs and avoided incalculable damage, but at the same time citizens are wondering what is happening and how it was possible for such a serious attack to happen right in front of the police and in front of Parliament.
Fear is spreading fast. In addition Uganda had just emerged from a period of lockdown due to Covid-19, which led to severe economic depression and hardship among the population. In this stage, therefore, Ugandans are particularly vulnerable, desperate for job loss, widespread poverty and a similar event increases the level of distress. Fortunately we are a Christian country and the people still have hope and faith, which gives us the strength to go forward".
The double attack occurred less than a month after two other attacks: on October 23, a first explosion in a bus on the outskirts of Kampala injured many passengers, while another explosion in a club in the capital killed a woman. In this case, the Allied Democratic Forces (ADF) claimed responsibility for the terrorist attacks. This is a Ugandan terrorist group with ties to ISIS (Islamic State), which is also accused of killing thousands of people in the eastern regions of the Democratic Republic of the Congo. As far as yesterday's act of violence is concerned, the most important clue leads to the terrorists of the "Allied Deomocratic Forces", who have already made an initial declaration to acknowledge the acts. "The reason for such an act remains completely unclear and the investigation will try to shed light on those who are responsible. The fact that it took place in the city center, where there was a lot of people and at a time when the population was struggling to return to normal life, is very upsetting for everyone. Today only faith and prayer give us security". (LA) (Agenzia Fides, 17/11/2021)