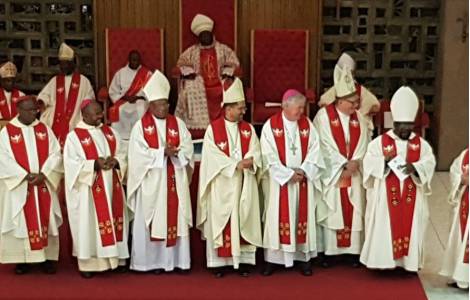 Manzini (Agenzia Fides) - "We make this proposal for a dialogue that is considered useful by all, on the basis of the words of Pope Francis, who asks all components of society to work together for dialogue, reconciliation and the peaceful settlement of different positions". According to the Pope, a real social dialogue 'involves the ability to respect the other’s point of view and to admit that it may include legitimate convictions and concerns' (Fratelli Tutti, 203)" : say the bishops of the Catholic Bishops' Conference of the Southern Africa (SACBC) after a pastoral visit to the kingdom of eSwatini.
In a statement published following the visit, the President of the SACBC, Mgr. Sithembele Sipuka of Mthatha, remarked that the Bishops "humbly say a word about what could contribute to building peace". "The Kingdom of eSwatini is known as a peaceful country, with a culture of courtesy, humanity, and hospitality. We also remember the hospitality with which the people of eSwatini welcomed refugees from Mozambique in the late 1980s and early 1990s, due to the civil war in that country. Both of these countries owe a huge debt of gratitude to the people of eSwatini. The exiles benefited from the superior quality of education in the Kingdom and returned well armed to serve their countries".
"Like many countries, eSwatini has faced numerous challenges, including being one of the countries most affected by the HIV pandemic. The suffering caused by HIV has been compounded by other social, political and economic challenges and recently reinforced by Covid-19, which forced many people into abject poverty. Over the years, the people of eSwatini, true to their peace-loving nature, have peacefully gone through these troubled times. The recent waves of unprecedented violence, resulting in deaths, injuries and widespread property destruction, seem to indicate a lack of patience that must be regained if this beautiful country does not want to fall into civil war and the suffering that goes with it". The bishops justified the visit as follows: "In view of this suffering and fearing that worse could happen, we as the Bishops' Conference of Southern Africa (of which eSwatini is part) decided to make a solidarity and pastoral visit to eSwatini and we are grateful to the government for welcoming us and talking to us about the situation in the country. We are grateful to the Catholics of eSwatini, to the women religious, to the priests, to the eSwatini Council of Churches and to the many civil groups, as well as to the individuals who shared their views on the situation in the country". Regarding the content of the talks, the bishops emphasize: "We are encouraged that all with whom we have spoken, including the government, have expressed their willingness to engage in dialogue and negotiation. However, in view of these differences, such a dialogue does not seem to be able to take place or at least not to have the hoped-for effect if it is not agreed. Although eSwatini is known for its traditional willingness to enter into dialogue, with the exception of the government, different to the possibilities for dialogue. In view of this clear wish, which is unfortunately accompanied by violence, it seems to us that initially the 'dialogue on dialogue' could be a constructive starting point". The Prelates note "a strong sense of alienation among the people and the desire". But "everyone is convinced of the gravity of the situation and the urgency of measures that will help to build a just and peaceful society. This is what the present brings us and above all the dignity of the human person in the image of God the Creator". In conclusion, the bishops assure the government of Swaziland and its citizens of their prayers and hope for the traditional mentality "which unites the country and leads to justice, peace and development for all". (Agenzia Fides,19/10/2021)