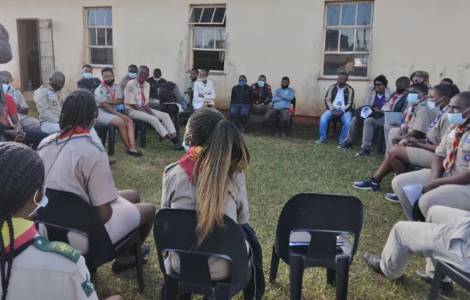 Manzini (Agenzia Fides) - "We live in a time of uncertainty and tension. Since the beginning of the crisis, which broke out at the end of last June, in our meetings with the interim Prime Minister, we have pointed out that the only way out of the impasse is national dialogue but, in order to work, this dialogue must be totally inclusive. We know well that dialogue is practiced here, but the real challenge today is that it becomes truly inclusive and up to now, it certainly cannot be considered as such". There is concern in the words released to Fides by Mgr. José Luís Gerardo Ponce de León, the Bishop of Argentine nationality, Consolata Missionary of Manzini, the only diocese of eSwatini. The small nation, the last absolute monarchy in Africa, known until a few months ago for its relative tranquility, plunged into chaos at the beginning of the summer following mass demonstrations bloodily repressed by the police. The Bishop notes: "Let's take, for example, the last visit of the delegation sent by the Southern African Development Community (Sadc). The representatives met with various interlocutors, NGOs, political organizations and associations. But an important slice of social realities was cut off because someone, from above, decided it was better not to include them. This way of doing things exasperates the spirits even more. The government and the king do not give the impression of wanting to proceed along the path of national dialogue. Meeting the civil authorities, we representatives of the Council of Churches spoke of the need for inclusive dialogue and offered to identify interlocutors to sit at the negotiating table. We therefore encountered many realities and, in another meeting with the new head of government, we presented a report. But the answer was that, due to the third wave of the virus, it was impossible to organize new meetings with all representatives. In the meantime, infections have decreased but no new opportunities for dialogue are in sight".
Mgr. José Luís Gerardo Ponce de León continues: "The situation has worsened since the pandemic broke out and the riots have made the context even more tense and unstable. A few months ago a report was published that photographs eSwatini as one of the most unequal Countries in the world. There is a big gap in society. A huge number of people have lost their jobs and, as a result, poverty has increased; half of the young people are unemployed and many young people see no hope for the future: this can give rise to anger and violence. On June 29, when there was a peak of violence, I was unable to go home and, on the way, I met many angry and frustrated young people; if the government does not do something concrete, anger will remain. Here, primary school is free, but taxes are paid when one goes to high school and many families cannot afford them. Those who manage to study and graduate have many difficulties in entering the world of work and families feel humiliated when they see their enormous efforts for the education of their children vanish".
From the violent clashes that raised fears in July, there is now relative calm: "Today there is an uninterrupted deployment of the army throughout the country. The curfew for Covid, although the situation has changed for the better, has been reduced by only one hour. There are no street clashes but we have news of local incidents and violence". The Council of Churches continues its meetings with all the realities of the country to monitor and propose solutions: "We firmly believe that if dialogue - concludes the Bishop - is still inadequate, it is because we are not yet prepared. Are we really ready to listen to each other? This is very important. Not only the government, but also society must make an effort. The Catholic Church intervenes in the debate, gives advice through statements, to have attitudes aimed at the common good and also financially supports the families most in difficulty". (LA) (Agenzia Fides, 8/10/2021)