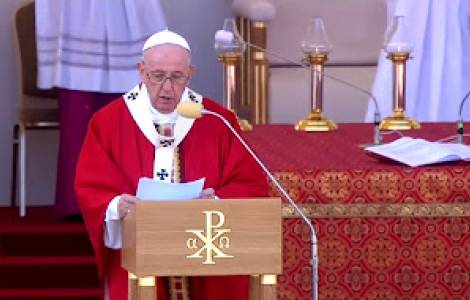 2021-09-14
Pope Francis: "The authentic Christian witness comes to life from the mysterious triumph of the Cross of Christ"

Prešov (Agenzia Fides) - The mission of the Church does not pursue the worldly ways of "triumphalism" and self-affirmation. Every authentic Christian witness comes to life from the mysterious triumph of the Cross of Christ and bears witness to it by aligning its dynamics with the "humble love" of Christ "which is fruitful in everyday life and makes everything new from within, like a seed that has fallen to the ground, that dies and produces much fruit". Thus Pope Francis, on the liturgical solemnity of the Exaltation of the Holy Cross, once again indicated the bond that inseparably unites the cross of Christ and the journey of the Church through history. He did this in the homily he gave during the Byzantine Divine Liturgy of St. John Chrysostom, which he presided over in the city of Prešov, in the square of Mestská športová hala, on the morning of the third day of his apostolic visit to Slovakia. The mystery of the cross of Christ – according to the Bishop of Rome - suggests and shapes forever the very movements with which Christians are present and work in the world and testify to the gospel and the salvation of Christ to their fellow men. The unprecedented way in which the Mystery decided to reveal itself remains forever the source of Christian witness, which for this very reason is incomparable to any form of cultural, political or religious propaganda.
In the eyes of the world – according to the Pope at the beginning of his homily, quoting Saint Paul - the cross of Christ is a “scandal”, “foolishness”, a symbol of failure. It was "an instrument of death, yet it became the source of life. It was a horrendous sight, yet it revealed to us the beauty of God’s love. That is why, in today’s feast, the people of God venerate the cross and the Liturgy celebrates it".
At times - the Pope acknowledged - even among those who call themselves Christians there is a temptation not to "accept that God saves us by allowing all the evil of our world to be unleashed upon himself".
A temptation that seems to prevail in those who aspire "to a triumphalist Christianity that is important and influential, that receives glory and honour. Yet a Christianity without a cross is a worldly Christianity, and shows itself to be sterile". On the other hand, those who by grace recognize "the glory of God in Christ crucified" testify rather to the dynamic of the incarnation, which then in a certain way shows itself in this way in which the Christian testimony takes shape. The mystery of the cross, according to Pope Francis, "can only be accepted in the tearful gratitude of those who have received an undeserved and unimaginable gift. It is of no use to make speeches about the cross if we do not pause and look upon the crucified look and open our hearts to him, if we are not astonished by his open wounds, if our hearts do not swell with emotion and weep before God, who was wounded with love for us". For this reason - according to the Pope - the cross should never be reduced to "a political symbol, a sign of religious and social significance". For this reason, the testimony that arises from contemplating the crucifix and culminates in martyrdom - according to the Pope - never has the connotations of a "triumphalistic" performance. "If we fix our gaze on Jesus, his face comes to be reflected on our own: his features become ours, the love of Christ wins us over and transforms us. I think of the martyrs who in this nation bore witness to the love of Christ in troubled times, when everything counselled silence, taking cover, not professing the faith. Yet they could not – could not – help but testify. How many generous persons suffered and died here in Slovakia for the name of Christ! Theirs was a witness borne out of love of him whom they had long contemplated. To the point that they resembled him even in their death".
In our time, even where Christians are not persecuted, our witness can be weakened by worldliness and mediocrity". The distinctive sign of every authentic witness is not the transformation of the cross into "a flag", but the life lived "according to the Gospel of the Beatitudes". "The witness of the Cross - continued the Successor of Peter "does not remember the wrongs of the past and does not complain of the present", does not use the ways of deception and worldly pretension: does not want to impose himself and his followers, but to give his own life for others. He does not seek his own advantages in order to be seen as devout". "The characteristics peculiar to the Christian witness, which corresponds to the cross of Christ, differ from those of any kind of "propaganda", since" the witness of the cross is only a strategy persecutes that of the Master: humble love".
Therefore, let the testimony which is passed from person to person through osmosis, the only way by which the salvation of Christ can reach and touch the hearts of men and women of our time. Authentic witnesses, the Pope said at the end of his homily - generate other witnesses, because they are givers of life. That is how the faith is spread: not with the worldly power but with the wisdom of the cross; not with structures but with witness". (GV) (Agenzia Fides, 14/9/2021)