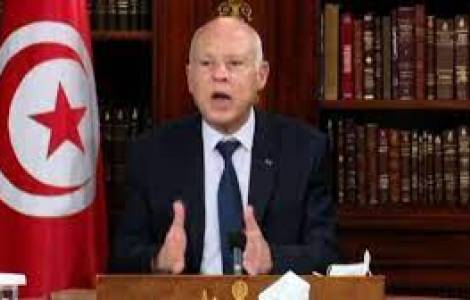 2021-10-01
Archbishop Antoniazzi: the appointment of a woman as prime minister is not just an "image campaign"

2021-07-27
AFRICA/TUNISIA: The President suspends the government and takes all powers. Archbishop Antoniazzi: "the population supports him"

2021-04-13
Appointment of the National Director of the Pontifical Mission Societies, His Exc. Mgr. Ilario Antoniazzi

2019-07-23
Appointment of the National Director of the PMS, Fr. Nicolas Lhernould

2019-06-28
"I am confident: Tunisians will be able to react with strength and courage" says the Archbishop of Tunis

Tunis (Agenzia Fides) - The decision of Tunisian President Kaïs Saïed to suspend the legislature and assume full powers "was welcomed with relief by the majority of the population, exhausted by a situation that seemed to have no way out". This was reported by Archbishop Ilario Antoniazzi, at the head of the archdiocese of Tunis, in a conversation with Fides. "Now - adds the Archbishop - only twenty-four hours have passed since the presidential measures, the euphoria seems to have passed, there is a state of waiting for the further decisions that the President will take. But in this wait, trust and hope still prevail". The social and political context in which the surprising presidential initiative matured is described in all its gravity by the Archbishop’s concise report: "the population was fed up with the situation and the rulers who were here. We have reached a point where there is no work, tourism is zero, the only thing that seems to be going strong are the infections due to Covid-19. It is sad to say, but this is the situation: hospitals are full, there is lack of oxygen, we are close to disaster. Visiting certain hospitals, I had the impression of reviewing the images seen in Italian hospitals in the darkest moments at the beginning of the pandemic ". In this scenario, "the population initially placed their trust in the government, but then, in the face of government immobility, the opening of credit soon faded away. The ministers were accused of corruption, and of defending their private interests. Therefore the President waited for the national holiday to knock its fist on the table. After his speech, in which he essentially suspended the government, people went out on the street in celebration, despite the curfew, until 2 am, amidst songs, demonstrations". Now Saïed has announced his intention to appoint a new Prime Minister and a new government. "Even all the old parties, including those in power, have said they support him". The most consistent opposition comes from the Workers' Party (left) which accused the President of wanting to bring the country "under the dictatorship of one man", and above all from the Islamist Party Ennahda, whose leader Rached Ghannouchi - reports Archbishop Antoniazzi "said he was fomenting a coup. But the majority of the population is now with the President, and the army also supports him, which has surrounded the institutional offices and prevented them from being besieged by the militants of Ennahda".
Now, expectation is growing for the President’s future moves, as well as the fear of increasing violent clashes between groups of militants in favor of and against presidential decisions. "According to the information circulating", Archbishop Antoniazzi reports, "the President has ordered the security forces to patrol the airports to prevent some 'big boys' from leaving the country. In his speech to announce his decisions he insisted that before the law there are no rich and poor, powerful or weak, and that everyone is equal. Those who do not have a clear conscience will be judged according to justice, he said in his speech. He, who is a jurist, also participated in the drafting of the new Constitution, and knows it well. Now,
concludes Archbishop Antoniazzi "the unknown is that there may be a restriction of freedoms and that we are moving towards an authoritarian regime. Some TVs have been closed. But of course for now the population is on the President's side. Let's see how things go. He promised directives, changes. Things he will certainly do, but he still has to do". (GV) (Agenzia Fides, 27/7/2021)