AFRICA/eSWATINI - The Bishop of Manzini: "it is the most serious crisis that can be remembered, no one should expect quick responses" 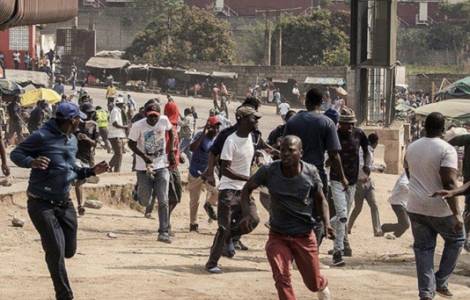 Manzini (Agenzia Fides) - The small African state of eSwatini, known until 2018 as Swaziland, is located in southern Africa, on the eastern flank of the Dragons Mountains, and borders Mozambique to the east and South Africa to the north, west and south. Usually quiet, the monarchy has been shaken in recent weeks by unprecedented popular protests, which have led to violence, damaging people and property, leaving people dead and injured.
There have been numerous arrests by the police who have repressed the demonstrations, while calls for dialogue to overcome the crisis are multiplying (see Fides 5, 7,15/7/2021). According According to the latest media reports, King Maswati III has appointed a new Prime Minister. The Catholic Church is present with a single diocese, suffragan of Johannesburg, which has a population of 1,046,000 and 56,000 Catholics. The bishop of the only diocese in the country, which is based in Manzini, His Exc. Monsignor José Luis Gerardo Ponce de León, IMC, has granted an interview to Agenzia Fides asking him some questions about the situation and the ecclesial reality.

Your Excellency, what are the causes that have led to this crisis and what hope is there for the future?
I think the answer to this question is precisely the one that will guide the future. The Swaziland Council of Christian Churches, created in 1976 and of which we are founders together with the Anglican and Lutheran churches, in its document delivered to the Prime Minister specifically asked us to reflect on what has led us to this crisis. Some may choose to blame a small group of people (local or foreign) for generating this violence, others to the social crisis caused by Covid-19, others to the contrast between the lifestyle of the royal family and that of the rest of the the population, others to police violence or the lack of freedom to express opinions ... There is a combination of elements that have led to this crisis. Although I have been the Bishop of Manzini for seven and a half years, which is not a long time, I understand that this is the most serious crisis that one can remember and no one should expect quick answers.
The word chosen to express the way forward has been "Dialogue". Since the beginning of the crisis, the Council of Christian Churches has met with different groups to understand how this dialogue take place, who should facilitate it, what the different preconditions are. A mission sent by SADC has also arrived, but so far, we do not know what their plan of action is.

Can you tell us about the reality of the Catholic Church in eSwatini, its commitment and its missionary dimension?
The first four Catholic missionaries arrived in Swaziland in 1914. We are a small presence of about 5% of the population with 17 parishes and more than 100 chapels. We are well known for our social service to this nation with 60 schools, a hospital, a hospice, 7 clinics, for our commitment against human trafficking and for being a safe space for dialogue, among other initiatives. When Pope Francis invited us to celebrate an Extraordinary Missionary Month, in October 2019, we chose to carry it out throughout the year, in order to deepen the missionary dimension of our local Church.
I accepted with great joy Pope Francis’ invitation to listen to everyone in preparation for the 2023 Synod, because it is exactly what we need now. We want to reflect together on how to be Church here, in this context, where we are the only Catholic diocese of this nation.

What role can the Church play in this crisis?
The country has three Christian organizations that bring together the Christian Churches: the League, the Conference and the Council of Churches. Even before this crisis began, the Swaziland Council of Churches made an appointment with the Prime Minister to present our concerns to him. We feared that violence would soon break out.
In fact, we met him on the day the riots occurred and we offered to get in touch with all possible stakeholders and to help the government understand what is needed right now. As a Council, we want to remain an independent body, capable of listening to everyone in order to build bridges. We are grateful to Pope Francis that he prayed for us at the Angelus on Sunday, July 4, before going into surgery. Ours is a small nation between two great nations, South Africa and Mozambique, which is little known. We need everyone's prayers to be able to discern God's will in this time of national crisis. (SL) (Agenzia Fides, 17/7/2021)