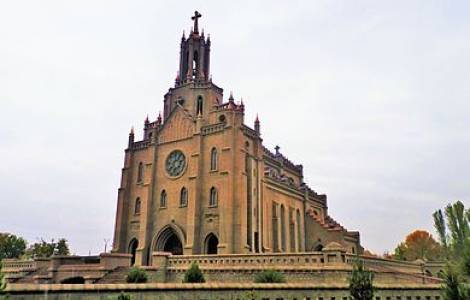 Tashkent (Agenzia Fides) - Many positive aspects derive from the new law "On freedom of conscience and religious associations" approved on July 7 in Uzbekistan. This is explained to Fides by Fr. Jerzy Maculewicz, Apostolic Administrator of Uzbekistan, and Fr. Ariel Álvarez Toncovich, priest of the Institute of the Incarnate Word, parish priest of Samarkand.
"This law, which concerns all religious denominations in Uzbekistan, emphasizes freedom of conscience: everyone can choose their own beliefs. It specifies that the country is secular and that there is a clear distinction between religion and the State", explains Fr. Toncovich. The priest also underlines how the new law helps to overcome an important obstacle for missionaries present in Uzbek territory: "In this part of the world, the word 'mission' is not conceived in a positive way, but rather as a constraint, a work of forced persuasion, which tries to alienate the faithful from other confessions. This new law has the merit of clarifying what is meant in Uzbekistan by the terms 'mission' and 'proselytism', specifying that what is prohibited is, in fact, exerting pressure on people to change their religion". This result was achieved thanks to a request of the Apostolic Administrator, Fr. Jerzy Maculewicz, who spoke together with other Uzbek religious leaders in one of the meetings that preceded the drafting of the legislative text.
Another important aspect, according to the parish priest of Samarkand, is that the reform does not prohibit children from attending religious organizations, provided that membership is spontaneous and that there is parental consent: "Surely, in general, we can say that it is a measure that allows us to work in peace and that does not impose further limits", concludes Fr. Toncovich. Improvements are also foreseen from a bureaucratic point of view, as pointed out by Fr. Jerzy Maculewicz: "In the past, to register a new parish, it was necessary to collect at least one hundred signatures from people who declared themselves interested in attending it, and it was necessary to obtain the consent of the inhabitants of the area. With the new legislation, only fifty people need to sign and the consent of the neighboring population is no longer necessary. Furthermore, the documentation can finally be sent electronically: the response will have to arrive in a precise time frame and, in the event of rejection, it must always be accompanied by a motivation", explains the Apostolic Administrator.
Since 2016, following the death of the authoritarian president Islom Karimov, Uzbekistan has embarked on a slow path of opening, summarized in the "Strategy 2017-2021", which sees among the "priority areas" of intervention also "inter-ethnic harmony and religious tolerance". As the Apostolic Administrator informs Fides, the government has asked all religious leaders present in Uzbekistan for an opinion on the reform, a country that, due to its nature as a bridge between two worlds, is characterized by a great ecumenical spirit. According to the Franciscan, in fact, "the Silk Road has strongly marked the features of this land: travelers who traveled the road from Europe to China often stopped here". However, the coexistence between cultures and religions dates back to much older times: in Buhara there is a synagogue that is at least 600 years old, but Jews say that their arrival dates back to about 2000 years. In the 8th century AD Muslims arrived and, until the 13th century, a large community of Nestorian Christians lived here. In addition, Soviet domination favored the arrival and mixing of different nationalities. Often, the Poles sent to the gulags of Siberia, once the period of forced labor was over, moved to Uzbekistan due to the favorable climate and the presence of many other compatriots. According to data provided by the Uzbek Parliament, "today there are 2,277 organizations of 16 different religious confessions on the territory of the Republic". Of these, 2094 are Islamic communities, based in 2067 mosques; 166 Christian religious organizations, 8 Jewish communities, 6 Bahà'í communities, a Hare Krishna society, a Buddhist temple.
There is also the Interfaith Biblical Society of Uzbekistan. Currently, the small Uzbek Catholic community, made up of about 3,000 baptized, has 5 parishes throughout the country: to the approximately 700 faithful of Tashkent, there are others present in Samarkand, Bukhara, Urgench and Fergana. In Angren, where a new church is planned to be built, there are 25 faithful. (LF) (Agenzia Fides, 14/7/2021)