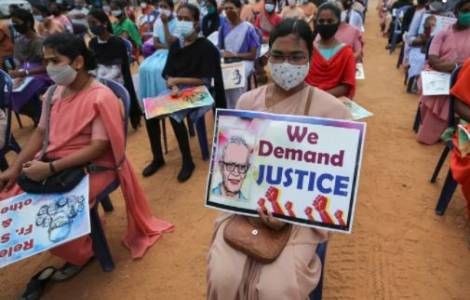 Mumbai (Agenzia Fides) - The Indian Jesuit Stanislaus Lourduswamy, better known as Father Stan Swamy, unjustly arrested for his commitment to defense of the Adivasis ("original inhabitants" of India), passed away yesterday, July 5, in a hospital in Mumbai, in the west of India.
He was 84 years old. As reported by Dr. Ian D'souza, Director of the Catholic Hospital of the Holy Family, where he was hospitalized, he was placed in intensive care on July 4 after suffering a cardiac arrest. His death occurred as a result of a lung infection, complications after Covid-19 and Parkinson's disease, which he already suffered from.
As reported by Father Jerry Cutinha, Provincial of the Jesuits of Bombay, Father Swamy's mortal remains will be cremated in Mumbai and the ashes will be taken first to Ranchi, where he lived for 18 years, and then to Jamshedpur in Jharkhand, seat of his religious province, for his final burial. The funeral mass is scheduled for 4:00 p.m. today, July 6, at St. Peter's Church, near the Holy Family Hospital, in Bandra, a suburb of Mumbai. The Jesuit had been in detention since October 8, 2020, accused of crimes related to terrorism and subversive activities. According to the National Investigation Agency (NIA), Father Swamy allegedly encouraged violence and helped illegal Maoist groups, an accusation that the cleric always denied. The NIA called the "Committee of Solidarity with Persecuted Political Prisoners", a human rights organization in which the Jesuit was involved, a "front organization for Maoist and extremist groups". Even the "Bagaicha", an organization founded thanks to the contribution of Father Swamy to ensure that the tribals become aware of their rights, had been labeled "part of the rebel communist front". Stan Swamy was arrested along with 15 other people involved in NGOs on terrorism-related charges. Those arrested include human rights promoters, journalists and academics arrested in connection with incidents in 2018 following a demonstration by Dalits and tribes, known locally as the "Bhima Koregaon case".
Independent observers and members of civil society in India say Father Swamy was seen as an opponent of the government because he fought for the enforcement of laws, passed by Parliament, which favor the lives of tribal people and their constitutional rights. Expressing his deep sorrow, Cardinal Oswald Gracias, President of the Bishops' Conference of India, said that "the life and commitment to the poor indigenous people and their struggles undertaken by Father Swamy will be forever remembered". "Stan's arrest was a wound. Under Indian criminal law, a person is innocent until proven guilty. Father Stan's case was not even heard. We were eagerly waiting for the case to be examined by a court and for the truth to come to light", said the Cardinal in a note sent to Fides. The Cardinal, who on January 21 of this year had asked Prime Minister Narendra Modi for the release of Father Swamy, noted that the priest "worked tirelessly for the dispossessed and oppressed, giving them a sense of dignity and elevating their lives".
In his message, Mgr. Felix Toppo, Archbishop of Ranchi, Jharkhand, said that Father Swamy was "a champion of tribal rights, a fighter for justice and a symbol of courage". "The fact that a religious, who suffered from Parkinson's disease, was arrested at the age of 84, was denied bail, contracted Covid in prison is a very sad fact: they arrested an innocent man and the courts refused to grant him bail. As human beings, we are weak and defenseless in the face of our cruel justice system. 'The caged bird' now sings in heaven, but his blood falls on our hands', said Jesuit Archbishop Toppo, using an expression used by Father Swamy in recent weeks. Cedric Prakash, an Indian Jesuit who closely followed the judicial process, defines him as "a martyr for justice and peace, who lived his entire life in passionate and selfless service to marginalized brothers and sisters". According to Gladson Dungdung, tribal leader of Jharkhand, "Father Swamy was a fearless, sensitive and neutral promoter of human rights. India's Constitution was particularly favorable to the implementation of fundamental rights. He continued to challenge cases of murder, torture and persecution of hundreds of innocent tribals accused of being Maoists or Naxalites". "The State government - he continues - called him a "Maoist" for opposing 'Operation Greenhunt', led by the Indian government, and called him a traitor for supporting the Pathalgadi Movement, which defended the rights of innocent natives. In the end, the government put behind bars anyone who legally challenged abuses by state forces. For us Father Swamy is a state murder, which we strongly condemn". "Swamy lives in our memory and will live forever. I hope his life and struggle will inspire us in the campaign to resurrect human rights, human dignity and the value of compassion. We must strive to keep alive the memory of the life and the struggle of Father Swamy", told Fides Irfan Engineer, Director of the "Center for the Study of Society and Secularism".
"Nobody should have this end due to the inadequacy of medical facilities inside the prison", noted Jesuit Father Arockiasamy Santhanam, spokesman for the National Forum of Religious and Advocate Priests.
"Swamy's death was foretold. It was clear that the state had decided to exert full force of vengeance on him and others for daring to speak out on behalf of the poor and needy", says the "All Indian Catholic Union", the largest association of lay Catholics in the country. "Legitimate questions regarding his arrest, imprisonment, denial of bail and the sad circumstances of his death will disturb the collective conscience of the nation for a long time", reads a statement issued by the Indian Catholic Press Association. (SD-PA) (Agenzia Fides, 6/7/2021)