EUROPE/SPAIN - Caritas Spain: despite alarmism, Europe appears to be compromised in a limited way in African emigration 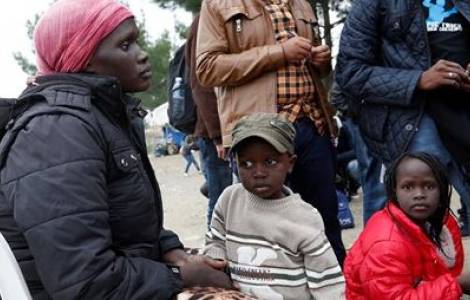 2022-01-13
Missionary Childhood Day: The Church has been a pioneer in the field of child protection for many years

2021-12-18
The "Star Sowers": the announcement of Christmas made by the little ones and the "gratitude" of the missionaries

2021-10-23
Towards Mission Sunday: promoting the mission of the Church through the witness of young people

Madrid (Agenzia Fides) - Africa Day celebrated yesterday gave Caritas Spain an opportunity, after the latest events related to African migrants in Ceuta and Melilla, to reflect on the migratory situation on this continent. The note sent to Fides by Caritas Spain indicates that the roots of the serious human mobility problems that the entire African continent must face affect Europe in a very limited way, despite alarmism at the borders and in public opinion. To have a complete idea of the magnitude of the migratory phenomenon in Africa, we read in the note, it is enough to emphasize that the majority of Africans who migrate do so between their own countries on the continent. According to data from the International Organization for Migration (IOM) and the African Union (AU), of the 258 million migrants in the world, 36 million (14%) were born in Africa. 53% of African migration occurs within the continent, 26% move to Europe, 11% to Asia, another 8% to North America and 1% to Oceania. Another reality is little known: Africa is the continent that welcomes the most refugees in the world (7.3 million, 25% of the world share), as well as having 19.2 million displaced people at the end of 2019. As Eva Cruz, Director of International Cooperation at Cáritas Spain points out, "it is necessary to understand to what extent the reality of migration from the South is not so much a question of security as the human rights of very vulnerable people, if we take into account the roots of these migratory flows and the combination of different causes, such as structural economic inequality and the interference of some international policies in states with enormous weaknesses in terms of governance". "This is the submerged part of the iceberg, whose visible tip is violence, armed conflict, hunger, climate emergencies and irregular migration", she adds. Therefore like Caritas "we do not see what Africa is experiencing right now as a crisis in terms of security, but rather a serious crisis of rights that are violated when there are armed conflicts, which in turn is fueled by frustration and lack of decent conditions". The note analyzes the situations that push many African migrants to move. Food insecurity is one of the most pressing challenges, affecting many countries on the continent: in 2020 more than 100 million Africans were in situations of crisis, emergency or food catastrophe, with an increase of 60 per cent compared to the previous year. The situation in 2021 continues to worsen, at least so far. To the structural causes (climate change, population growth, access to drinking water, land ownership, etc.), we must now add the impact of anti-Covid measures and consumer crises in the West resulting from the pandemic. Another serious difficulty is universal access to social, health and educational services, especially in rural areas and in the suburbs of large cities, where poverty is highly concentrated. In addition to the significant social expenditure that these services entail for countries with very limited resources, there is the pressure exerted by population growth. A positive element on how to deal with this migratory emergency, the note concludes, is constituted by good practices together with other organizations, with responses based on the protection of the human rights of people who migrate. One of these positive experiences has been carried out since 2015 through the RAEMH (Europe-Africa Network for Human Mobility), which brings together the joint action between Caritas Rabat (Morocco), Secours Catholique (France) and Cáritas Española, to coordinate the work between centers for migrants. In these 6 years, the accompanying itineraries for migrant women and unaccompanied minors have been consolidated, on the basis of the exchange of information and reception experiences between the members of the Network, which currently consists of 3 European Caritas, 3 from North Africa and 5 of West Africa. (CE) (Agenzia Fides, 26/5/2021)

AMERICA/BOLIVIA - Caritas Bolivia will continue to help migrants at the borders with Peru, Chile and Argentina in 2022