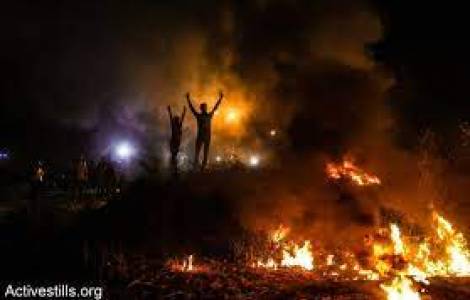 Haifa (Agenzia Fides) - Up until two years ago, thousands of Christians from all over the Holy Land came to Haifa in May to take part in the traditional procession in honor of Our Lady of Carmel, popularly known as Taalat al-Adra. On the two and a half kilometer route that winds from the Catholic parish of Haifa to the Carmelite monastery “Stella Maris” on Mount Carmel, the procession was usually opened by scout teams from all over the country and Christians of all denominations went praying on foot and sang Marian songs. This Christian festival confirmed in its own way the open and plural character of that city by the sea, the most populated in Israel after Jerusalem and Tel Aviv. Now that daily routine of peaceful coexistence between different people seems to have vanished in a moment. The new spiral of violence engulfing the Holy Land, starting with Jerusalem, has seen sectarian hatred explode in the heart of the so-called “mixed cities”, where Israeli Jews and Arabs have coexisted for a long time without tension". There are daily demonstrations, confrontations, assaults on shops and houses, throwing stones at cars," Carmelite priest Mikhael Abdo Abdo, National Director of the Pontifical Mission Societies of the Holy Land, told Fides. Tension increases in the evening: in the streets of the city, Arab youths and groups of Jews who have also come from abroad face each other. "I was already here during the years of the second and third Intifada, and in Haifa I have never seen anything like it. In a short time, they have managed to reopen wounds that never healed. There is a hatred that explodes everywhere, and that comes from who knows where".
In Haifa, out of a population of less than 300,000, Israeli Arabs number just 40,000. Among the factors that have paved the way for the outbreak of sectarian hatred, Father Abdo lists the political language of groups that for some time have described all Arabs in Israel as "terrorists". "It is not a question of justifying evil and violence", warns the Carmelite father, "but certainly that language linked to radicalization towards the right of the Israeli political scene has contributed to breaking the normality of peaceful coexistence that seemed to have prevailed in the last years". What is happening now has shown that the foundations of that coexistence were not solid. And now - Father Abdo points out - it is difficult to imagine from where to resume the paths of reconciliation. "Deep down", acknowledges the National Director of the PMS of the Holy Land "what is happening confirms the fact that the so-called 'Palestinian question' cannot be hidden and removed. Sooner or later, this unsolved knot always returns to haunt the peaceful coexistence between the peoples of the Middle East, and continues to destabilize the Israeli political scene as well: after what has happened in recent days, the possibility of seeing Israeli Arab Parties involved in creating a government to end sectarianism and lacerations fade". The new wave of violence in the Holy Land also affects the everyday life of the various religious communities: "People" Father Abdo tells Fides, who want to live in peace, now feel threatened, and many have withdrawn into their homes. We had to eliminate the liturgical celebrations in the evening. And now, it would also be useless and unrealistic to call the heads of the various religious communities to try to initiate reconciliation processes together. Interreligious contacts are frozen. We have returned to a time of distrust, suspicion and laceration". (GV) (Agenzia Fides, 18/5/2021).

ASIA/MYANMAR - Cardinal Bo: "Myanmar can only be reborn through reconciliation"

AMERICA/BRAZIL - Justice for the murder of Moïse Kabagambe: "barbarism becomes normal when it involves the poor"

AMERICA/UNITED STATES - Assembly of Bishops concluded: racism among the most debated topics