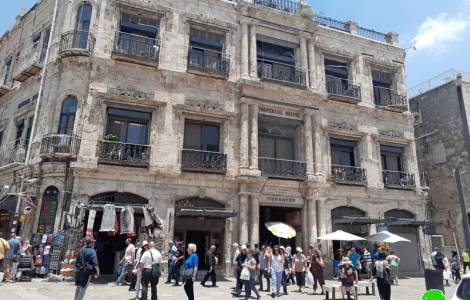 Jerusalem (Agenzia Fides) - An Israeli court in Jerusalem has rejected a request by the Greek Orthodox Patriarchate to cancel the sale of three properties in the Old City to the settler organisation Ateret Cohanim. The Israeli court ruling - reports the Israeli media - took place on Wednesday 24 June, and seems to definitively close the legal battle over disputed real estate, which lasted for almost 16 years.
The properties include two famous hotels, the Petra and the Imperial, located by the Jaffa Gate, considered the most direct entrance to access the Christian quarter of the Old City of Jerusalem. The sale, in 2004, sparked strong opposition within the church. Ateret Cohanim had located the properties and negotiated the price with the now-dismissed head of the Greek Orthodox Church in Jerusalem, Patriarch Irenaios.
In August 2017, the Jerusalem District Court had already rejected the legal initiatives with which the Greek Orthodox Patriarchate of Jerusalem had attempted to make Ateret Cohanim's acquisitions of the three properties disputed "illegal" and "unauthorized". After that sentence, the Patriarchs and Heads of the Churches of Jerusalem had signed a joint document (see Fides 5/9/2017) in which they denounced the "systematic attempt to undermine the integrity of the Holy City" and "to weaken the Christian presence in Holy Land". A project that, according to the Heads of the Churches of Jerusalem, also manifested itself in the "violations of the Status Quo" of the Holy Sites. In their joint document, also signed by Teophilos III, Greek Orthodox Patriarch of Jerusalem, and Archbishop Pierbattista Pizzaballa, Apostolic Administrator of the Latin Patriarchate of Jerusalem, there was firm opposition to "any action" by "any authority or group" that undermines those "laws, agreements, and
regulations that have ordered our life for centuries". The Orthodox Patriarchate of Jerusalem had appealed against the 2017 ruling to the Supreme Court of Israel, which on 10 June 2019 had confirmed the regularity of the transfer of ownership of the properties, legitimately purchased by foreign intermediaries who acted on behalf of Ateret Cohanim. Then, in December 2019, the legal dispute reopened, after a judge from the Israeli Court questioned the previous Supreme Court ruling, effectively opening up the possibility of starting a new trial on the controversial issue. Now, the umpteenth Jerusalem's District Court ruling seems to mark the definitive end of the arm wrestling around the disputed buildings of the Old City of Jerusalem. But the last word is not said: the Greek Orthodox Patriarchate of Jerusalem reacted to the latest developments of the story with a statement in which "surprise" was expressed at the District Court's decision, branded as unjust, and the will to bring another appeal, bringing the matter back to the attention of the Israeli Supreme Court. (GV) (Agenzia Fides, 26/6/2020)