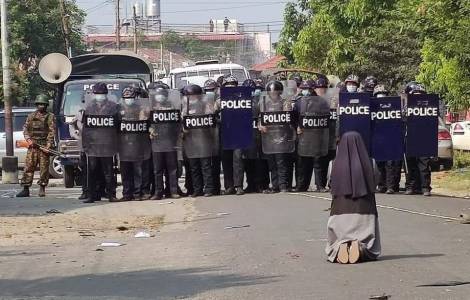 Myitkyina (Agenzia Fides) - A Catholic religious woman took to the streets in the city of Myitkyina, the capital of Kachin State in the north of Mynamar, and asked the security forces not to shoot young demonstrators who are protesting peacefully. Sister Ann Nu Thawng of the Congregation of St. Francis Xavier in the diocese of Myitkyina, became the heroine of yesterday, February 28th, which was marked by harsh repression of the Burmese police, who, according to the United Nations, opened fire, killing 18 people and injuring more than 30 nationwide.
"In the Myitkyina area, demonstrations so far have always been peaceful and without incidents. However, yesterday episodes of violence risked precipitating the situation", said Catholic Joseph Kung Za Hmung, editor of the "Gloria News Journal", the first Catholic online newspaper in Myanmar. "The action of the nun and the response of the police who, upon seeing the nun's plea, stopped, surprised many of us. Sister Ann Nu Thawng is today a role model for Church leaders: bishops and priests are called to step out of the their comfort zones and follow her courage as an example". Many non-Catholics also praised Sister Thawng's brave efforts, whose entry went viral on social media. "More than 100 demonstrators were able to find shelter in her monastery. It saved them from brutal beatings and arrests by the police", says the Director.
Commenting, in his homily yesterday, second Sunday of Lent, on the social and political crisis in the country, Cardinal Charles Maung Bo, Archbishop of Yangon, noted: "The Gospel of the Transfiguration is so current that it reflects the events of these days: What transfiguration are we looking for in Myanmar today? If we seek it, all the confusion, all the darkness, all the hatred will go away and our country, the famous Land of Gold, will be transfigured into a land of peace and prosperity".
"During the last month - continued the Cardinal - we have implored everyone: peace is the only way; peace is possible. Pope Francis has called for the resolution of all conflicts through dialogue. Those who want conflict do not want the good of this nation. Let us all become Elijah who proclaims peace, by lighting a lamp of hope in the midst of darkness". Cardinal Bo prayed for the nation that "has seen so much suffering, so much war, so many deaths" and said, "Like Abraham, we seek a promised land. The promised land comes when we are ready to sacrifice what we consider very dear".
He concluded his message: "Conversion is the central message of Lent. Let's challenge ourselves. Let's see each other in a better light. There is a possible new world, a possible new Myanmar, a conflict-free nation is possible if that nation is transfigured into the glory it deserves. Let us make peace our destiny, not conflict. Weapons are unnecessary. We must rearm ourselves through reconciliation and dialogue. Myanmar's Mount Tabor must be climbed with patience, tolerance, if we are to witness this transfiguration. Evil must disappear, but it cannot be destroyed by another evil".
The Burmese army took power on February 1 in a coup, declaring a one-year "state of emergency", after accusing the National League for Democracy, the party of the civilian leader Aung San Suu Kyi, under arrest. (PA-SD) (Agenzia Fides, 1/3/2021) 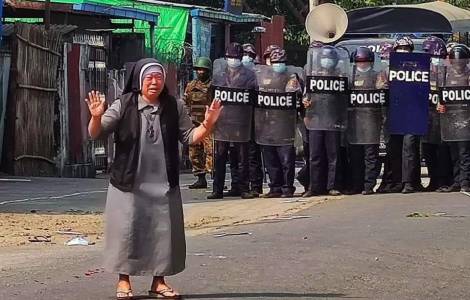 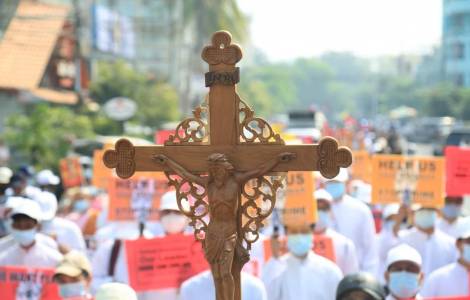 ASIA/MYANMAR - The nuns accompany and comfort the young demonstrators