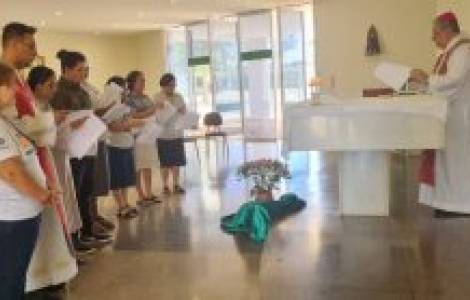 2023-02-01
The situation of indigenous peoples arouses "holy indignation" in the hearts of all, especially Christians

2023-01-30
Indigenous Yanomami: "the Church is always for the defense of life, land and the rights of peoples"

Brasilia (Agenzia Fides) - "You are a small group, but God's grace is great. May you, wherever you are, be the handful of leaven that is put into the dough, with your life and your mission to make Jesus known and loved! Be multipliers of God's love, spread the joy of the Gospel to everyone you meet! Wherever you go sow love". With these words, Father Djalma Ribeiro, director of the Missionary Cultural Center (CCM), encouraged the group of seven religious missionaries who, after attending the formation course, have been sent to Ad Gentes.
The course, which began on October 3, organized in collaboration with the Brazilian Conference of Religious (CRB) and the CNBB's Pastoral Commission for Missionary Action and Inter-Church Cooperation, was closed with a mass presided over by the Auxiliary Bishop of Rio de Janeiro and Secretary General of the Brazilian Episcopal Conference (CNBB), Bishop Joel Portella, this October 18.
In his homily, the Bishop highlighted how beautiful it is "when we can bring the Word of God into our lives, into our existence, and you are masters in this". At the end of mass, he handed over the missionary cross to the seven religious.
One of the participants in the course, Sister Heide Thaís, of the Franciscan Missionaries of Mary, born in Brasilia and currently residing in Taubaté, has been sent on a mission to the Democratic Republic of the Congo. She underlined that the experience of participating in this formation course has enriched her above all thanks to the reflection of being called and sent "as a Church and not only as a religious congregation". In addition, she added that during the course the contributions of the formators were important, moreover "we also had the presence of some Bishops, who have strengthened in us the reality that we are Church - sent, I do not go alone, I go with the whole Church".
The general objective of the course is to offer specific missionary formation for missionaries sent on mission Ad Gentes, questioning the personal meaning given to the term “mission”, drawing on the biblical and theological aspects of the term. Participants are also offered essential theoretical and practical references for missionary action and moments of discernment and spiritual revitalization.
The Missionary Jubilee Year that the Church of Brazil is experiencing to commemorate the missionary journey at the international and national level, as well as to project "missionary action as a paradigm of the whole work of the Church" also includes the 60th anniversary of the Missionary Cultural Center (CCM ) and the 70th anniversary of the creation of the National Conference of Bishops of Brazil (CNBB). (SL) (Agenzia Fides, 20/10/2022)

AMERICA/BRAZIL - "Sister Churches": collection of Pentecost for the mission in Mozambique

ASIA/SOUTH COREA - Archdiocese of Seoul sends priests to the mission