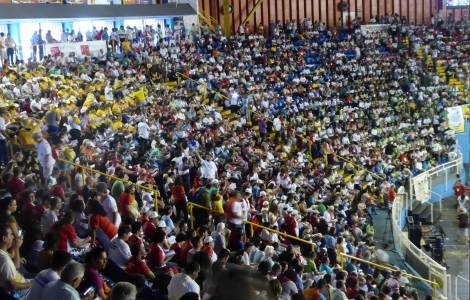 Paraná (Agenzia Fides) - "The meeting of the Basic Ecclesial Communities of Brazil is a call to renewal in the practice of life, especially in evangelical service in the urban surburbs, both in a methodological sense and in application, so that one can initiate a true urban Pastoral care. It is necessary to make concrete choices of life": with these words the Archbishop of Londrina, Mgr. Geremias Steinmetz, points out in an interview with Agenzia Fides the themes and contents of the 14th meeting of the Basic Ecclesial Communities (CEB) of Brazil, titled "The CEB and the challenges of the urban world", from 23 to 27 January, in Londrina, in the Brazilian region of Paraná. The gathering brings together about three thousand people, who have come from almost every diocese in the country.
Mgr. Geremias Steinmetz expresses to Fides the joy of the local Church "to receive people from all over the country and to know different experiences". The meeting is held every four years and represents a moment of celebration and reflection, attended by Bishops, priests, religious and a large majority of lay people, as well as representatives of other Christian Churches.
The meeting is characterized by celebrations and reflections on the proposed theme, following the method of "seeing, judging and acting", through workshops on different themes, focusing on the reality of the urban world, especially in light of the slogan of the meeting: "I saw and heard the cries of my people and I came to free him ".
The Archbishop affirms that the main objective of the Basic Communities is, in fact, "to build an ever more just, fraternal and supportive city". And this is reached through prayer, the Eucharist, or listening to the Word of God but also "committing ourselves to creating the conditions for this to be fulfilled".
Fr. José Marins, one of the great scholars of the Basic Ecclesial Communities in Latin America, explains to Fides: "The basic ecclesial Communities are linked to the Second Vatican Council: the Basic Community commits all the People of God, that is, all the baptized, in the mission of transforming the world", an idea that already appears in the Conference of Medellín. According to Fr. Marins, the basic Community "lives the ideas of the Council, constantly walking in that perspective", having "the Kingdom of God as reality and objective".
In a message to the participants of the meeting, Pope Francis, through the Secretary of State, Cardinal Pietro Parolin, sent "his word of encouragement and blessing", recalling that "God is never indifferent to the suffering of his people".
The Holy Father recalled "the ecclesial communities to be, in Brazilian society and the nation, an instrument of evangelization and promotion of the human person" to help avoid "the terrible effects of the culture of rejection". (LMM) (Agenzia Fides, 26/01/2018)

ASIA/INDIA - In the Year of Mercy, the Sisters of St. Paul bring the Gospel to the suburbs

ASIA/INDONESIA - The Church's commitment to education: a "Charity Run" for precarious teachers

AFRICA/DR CONGO - The frank and explicit political commitment of Christians: a prophetic voice in society