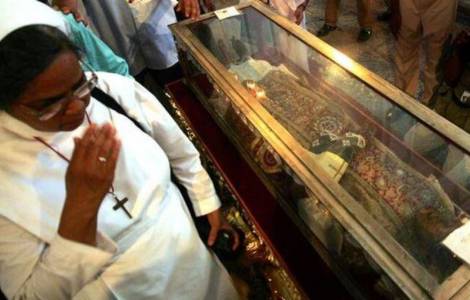 Panaji (Agenzia Fides) - "Following in the footsteps of St. Francis Xavier, we are called to remain close to the poor and those who have no voice and to become true witnesses and messengers of Christ", said the Provincial of the Jesuit in Goa, Fr. Roland Coelho, on the occasion of the feast of Saint Francis Xavier on December 3. The saint and evangelizer of Asia first landed in Goa and was later named "Patron of the missions". In the message sent to Fides, Fr. Coelho emphasized : "Let us allow the love of Christ to transform us. Let us allow ourselves to be filled with the fire of Christ's love for all people. During this Covid-19 pandemic we can be witnesses and prophets and be close to people in need, regardless of their religion. We are next to the peasants who are protesting in Delhi and have been deprived of their rights. We stand alongside Father Stan Swam and other political prisoners who fought for the rights of tribals, Dalits and the oppressed. We stand by the vulnerable, marginalized and voiceless".
Father Roland recalled "the letters of St. Francis Xavier, which made his missionary activity in Asian countries known in Europe, inflaming many hearts for mission". And he said: "St. Francis Xavier, facing Ignatius of Loyola, asked himself: what have I done for Christ? What am I doing for Christ? What should I do for Christ? Ignatius urged him to look beyond himself and to embrace the whole world. Francis Xavier felt the need to preach the Good News to the whole world". The Provincial continued: "When he arrived in Goa, Francis Xavier did not know the local language. He learned it, had the catechism translated and taught it in the local language. At first they mocked and insulted him. Then people saw the genuineness and holiness in this man and appreciated him as an authentic person, a promoter of peace and good".
Today the Saint unites people of all faiths, as the Prime Minister of Goa, Pramod Sawant underlined in his message, underlining "the character of unity and the blessing that strengthens the social fabric, in a time of pandemic".
For the first time in 400 years, the solemn Eucharist of the feast of St. Francis Xavier was broadcast on December 3rd in the basilica “Bom Jesu” in Goa, due to the Covid-19 pandemic, online and on TV, so that the faithful from home could partecipate. For the same reasons, the usual pilgrimage to the Basilica of Bom Jesu for the Novena of St. Francis Xavier was not held in 2020, which gathered faithful from all over the nation. Only one representative per parish was admitted to venerate the body of St. Francis Xavier, kept in the Basilica. (LM-PA) (Agenzia Fides, 3/12/2020)

AMERICA/BRAZIL - "Women on mission": women at the forefront of the Church's mission

EUROPE/SPAIN - Spanish-American Day: "Not all of our brothers and sisters in Latin America can receive the sacraments regularly"