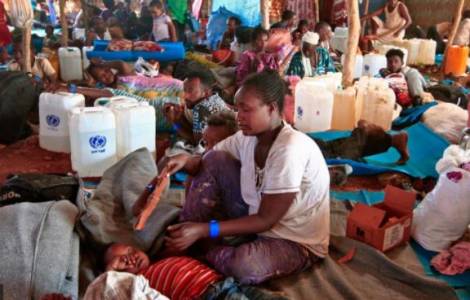 2022-06-02
"The Church is not yet an angelic community. It lives in the world without being of the world"

2022-05-16
"An abyss that only divine love can fill": the canonization of Charles de Foucauld experienced by a missionary of the 'last mile'

Addis Ababa (Agenzia Fides) - The Ethiopian government has signed an agreement with the United Nations to allow the creation of a humanitarian corridor "without obstacles", at least for the areas under the control of the federal government, which will allow the arrival of food, medicines and other essential aids in Tigray. Since 3 November, the day the fighting began, the northern region of Ethiopia has remained isolated. Stocks of food and fuel have gradually run out. For weeks, the United Nations and other subjects have unsuccessfully asked for access to the region to help the six million people. "We are working to ensure that assistance is provided throughout the region and to every single person who needs it" – said Saviano Abreu, a UN spokesperson. "We demand that all parties to the conflict guarantee that aid in Tigray reaches its destination and is distributed according to the principles of humanity, impartiality, independence and neutrality", he added.
The humanitarian situation is serious. It is estimated that more than a million people have evacuated in Tigray and more than 45,000 of these have found refuge in Sudan. The most penalized by this situation are the 100,000 or so Eritrean refugees in the camps near the Tigray border who found themselves on the front line. Some refugees have reportedly been killed or kidnapped and serious violations of international standards have been committed.
"Apart from armed clashes - explains to Agenzia Fides Fr. Mussie Zerai, an Eritrean priest committed to supporting Eritrean refugees - two threats are looming in the refugee camps: that of forced repatriation to Eritrea and enormous livelihood difficulties due to the sudden interruption of all forms of assistance and supples, including the most essential goods".
The threat of repatriation concerns in particular the Shimelba camp, located furthest to the north and closest to the border with Eritrea. For days, reports have been circulating that about six thousand refugees have been blocked in or around the reception center and repatriated under arrest by Eritrean military units who have entered Tigrinya as allies of the Ethiopian federal army. "Basically, a real mass deportation - says Fr. Mussie -, whose victims risk becoming" ‘desaparecidos’, impossible to find, because all the registers of the UNHCR have been destroyed, so as not to leave any trace of the camp guests or in any case to make searches extremely difficult. Ethiopia is obliged to guarantee the safety and freedom of these people. No one can ignore, in fact, that all refugees are considered by the Eritrean government as 'traitors' and 'deserters'. Forcing them to return to Eritrea means exposing them to real reprisals including prison and death consisting in revenge and revenge for this dictatorship that every refugee has accused the whole world with by his own flight".
Assistance is an increasingly serious problem that affects all refugee camps. Until the out break of the conflict, sufficient assistance and sufficient supplies for the daily life of thousands of refugees were provided by the Tigray government and by international humanitarian aid. Since then, supplies and services have rapidly dwindled and ran out.
"We strongly demand- concludes Fr. Mussie - urgent interventions from all the main international institutions (in particular the United Nations, the African Union, the European Union as well as the Addis Ababa government itself) with three priority objectives: to verify the validity of the news of forced repatriation to Eritrea of thousands of refugees and, in this case, to intervene with the utmost speed and firmness; organize humanitarian channels that allow the transfer to other states of the thousands of refugees who have found themselves involved in the war against their will; immediately reopen the borders of Tigray to humanitarian aid". (EC) (Agenzia Fides, 3/12/2020)