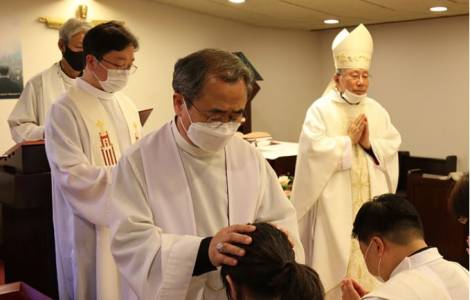 Seoul (Agenzia Fides) – With the Solemn "Mass of the missionary mandate", the Archdiocese of Seoul celebrated, in this month of October, traditionally dedicated to missionary work, the sending of six new Korean missionary priests called to mission in foreign countries. As Fides learns, Fr. Peter Tae-guen Kim will visit the Archdiocese of Osaka and Fr. Park Albert Min-woo the Diocese of Sapporo, Japan, while Fr. Park Paul Hyoung-moon will serve in the Diocese of Engativa, Colombia, and Fr. Marcellus Sang-hyun Han in the Archdiocese of Santiago, Guatemala. Fr. Michael Jung-hoon Shin, destined for the Archdiocese of Munich and Fressing, Germany, and Fr. Augustin Min-woo Ahn, missionary in the Archdiocese of Osaka, Japan, had already left in recent months, but because of the lockdown, they have only now received the "official mandate" from the Church.
As reported in a note sent to Fides by the Communications Office of the Archdiocese of Seoul, with this solemn Mass, the local Church resumed the sending of missionary priests abroad, which had been temporarily suspended and postponed due to the Covid-19 pandemic. On October 8, at the Archbishop's Chapel, Mgr. Job Yobi Koo, Episcopal Vicar in charge of overseas missionaries, celebrated mass by blessing and officially investing the priests sent to Japan, Colombia and
Guatemala. Mgr. Yobi Koo said in his homily: "I am grateful to the priests who have responded to their call as missionaries in these difficult and challenging times, in the midst of the Covid-19 crisis. Let us never forget that the Holy Spirit always guides each of us". Bishop Koo gave the priests a letter of appointment and put a stole around their neck as a sign of the sacred duty to live and bear witness to faith in Christ. His Mgr. Benedictus Hee-song Son, Vicar General of the Archdiocese of Seoul as well as the priests and members of the Department in charge of Overseas Missionaries was present at the celebration. They all prayed "so that the missionary priests may faithfully accomplish the mission of proclaiming the Gospel". Bishop Koo and Bishop Son subsequently blessed the priests through the laying on of hands.
Bishop Son encouraged the priests, exhorting them to always trust God and to address Him in all circumstances, with prayer, saying: "You will encounter difficulties during your ministry of apostolate in mission, but remember that the Lord is always there, beside you".
Fr. Young-ho Song, Director of the Department for Overseas Missionaries, pledged to support both materially and spiritually the priests sent so that they can focus exclusively on their pastoral activities in mission. And he concluded the Mass by asking priests to "be missionary priests full of joy and love".
Currently, the Archdiocese of Seoul has 22 missionary priests in ten countries of the world and continues to prepare missions abroad for its priests, religious and lay people who feel called to the missio ad gentes. (PA) (Agenzia Fides, 14/10/2020)

ASIA/PHILIPPINES - In times of pandemic, "preaching and bearing witness to the Gospel are particularly important"