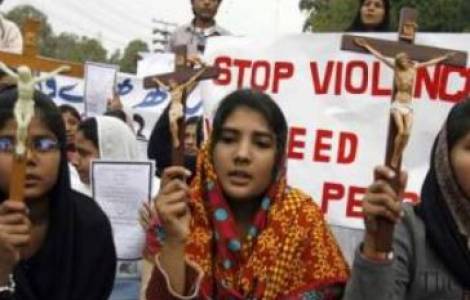 Islamabad (Agenzia Fides) - A Senate committee in Pakistan rejected a bill calling for the protection of religious minorities and their rights which therefore will not be scheduled in the Senate's proceedings and will not be debated or voted. As Agenzia Fides learns, the draft law, called "Protection of Rights of Minorities Bill, 2020" was presented in September by Senator Javed Abbasi, a member of the Pakistan Muslim League-N.
The text contains a series of measures to protect minorities: it states that hate speech and offensive material against religious minorities must be removed from school textbooks. And he suggests that the government should provide protection and assistance to persons who have been victims of "forced conversion", while sentences of up to seven years in prison are to be imposed for the kidnapping and forced conversion of minority girls. In addition, the bill regards marriage between a Muslim man and a minor of another religion as "forced marriage" and therefore considers it "null and void", providing for penalties for those who organize such marriages. Hate speech and violence against religious minorities - the document states - implies a three-year prison sentence and a fine of 50,000 rupees, while discrimination against religious minorities is a crime punishable up to one year in prison and a pecuniary fine.
In the bill there is also a part in which the government undertakes to protect the assets and properties of religious minorities (providing for prison sentences and fines for those who harm them), and establishes that all crimes committed against religious minorities cannot be remedied in private but must be tried in court.
It should be noted that the government of Imran Khan let the text go through the process of reaching the Senate, but the Senate committee dedicated to religious affairs rejected it. The members of the Committee stated that there is no need for specific rules to protect minorities and that already existing rules are sufficient to guarantee their freedom and well-being.
The rejection of the bill caused disappointment among religious minorities. Adan Farhaj, spokesman for the NGO "Pakistan Minority Rights Commission" remarked to Fides: "The bill presented by Abbasi in a courageous manner is going in the right direction. We ask the government and the members of the Senate to play their institutional role by supporting and approving this bill. In any case, this refusal does not stop our social and political campaign: the political exponents of religious minorities will undertake to submit it again, seeking the necessary consent".
Christian leader Aftab Alexander Mughal, director of the magazine "Minority concern", notes to Agenzia Fides: "Since August 2018, since Prime Minister Imran Khan took power, at least 31 members of minority communities have been killed, 58 have been injured in targeted attacks and 25 cases of blasphemy have been recorded, while at least seven minority places of worship have suffered attacks or intimidation. In this context, no real change can be expected under Prime Minister Imran Khan's rule, despite his initial statements. Many important political parties that support him, such as Tehreek-e-Insaf, have no intention of promoting and protecting the rights of minorities".
It should be noted that in August the Parliament of Pakistan (and also the Provincial Assembly of Punjab) adopted a resolution presented by some Catholic politicians, Naveed Aamir Jeeva and Khalil Tahir Sidhu. The resolution provides that the well-known speech of Muhammad Ali Jinnah of 11 August 1947 to the constituent Assembly, in which the founding father of Pakistan, guarantees religious freedom to religious minorities and outlines an inclusive and tolerant Pakistan, to be expressly published in all school textbooks. (PA) (Agenzia Fides, 2/10/2020)