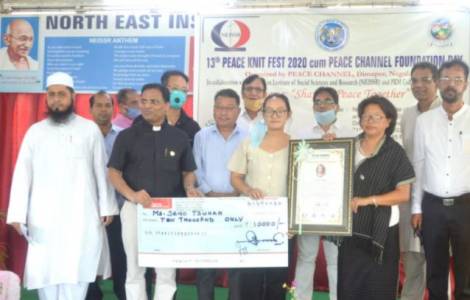 2021-04-26
The Indian Bishops: closeness to the population affected by the pandemic; the government is clearly responsible

Dimapur (Agenzia Fides) - The commitment of the Catholic community in the diocese of Kohima, in Nagaland, to promote peace in the north-eastern Indian region is much appreciated. As reported to Fides, the "Peace Channel", a very active movement that promotes a culture and concrete actions for peace, born within the diocese of Kohima and animated by Catholics. For the past 13 years, the movement has awarded people with the "Peace Channel Award," given to those who have helped prevent, intervene and offer outstanding action in peace building, conflict resolution and related issues in Nagaland and the northeast of India.
The states of northeastern India often face tribal conflicts or the rebellion of local groups. Conflicts often arise for social, cultural and political reasons. The Catholic Church has always proposed herself as one of the protagonists in supporting the pacification of the region, even by directly getting involved in conflict mediation activities.
As Fides learns, the 13th Peace Channel award of the year was given to Seno Tsuhah, a woman and civil society activist, for her contributions in addressing the issues of women's rights, good governance, management of natural resources and sustainable livelihoods in Nagaland. Tsuhah, who works in the "North East Network", a women's rights organization in northeastern India, has 20 years of experience working with the grassroots communities of Nagaland, particularly with women.
Its work includes mobilization and organization, awareness raising, capacity building, research, documentation. Her commitment to ecological issues is aimed above all at young people, for correct audiovisual documentation and the promotion of a culture of sustainability.
At the award ceremony, held in recent days, Catholic priest Father C.P. Anto, director of "Peace Channel" thanked priests, nuns, and lay leaders of civil society and all the actors of the movement, urging everyone to live values such as compassion, kindness and hope in the face of the pandemic. He then appealed to society to build peace and reconciliation with everyone and to promote dialogue as a means of resolving conflict or difference. "Peace Channel has focused on building a culture of peace among children, young people and adults in order to make Nagaland India's most peaceful country by 2030", he hoped. "We are confident that peace initiatives will bear fruit in the future. We appreciate interfaith efforts, on a secular fabric, religious communities can offer and actualize the vision and a life of peace", he said, pointing to "the urgent need to have good leaders in governments in society". "Not only human beings but our entire planet, mother earth, needs healing. The Covid-19 crisis is also a time to reconcile and make peace with mother earth", he concluded. (SD-PA) (Agenzia Fides, 1/10/2020)

AMERICA/PERU - The Church is committed to assisting more than one million Venezuelan immigrants, another 500 thousand request the recognition of refugees

AFRICA/ETHIOPIA - Building peace in the Amhara region of the country: the commitment of Catholics

AFRICA/SOUTH SUDAN - Forgiveness, unity, and reconciliation: the message of the wounded Bishop