EUROPE/SPAIN - "Despite the adversity, we will not leave!" video message of hope from missionaries around the world 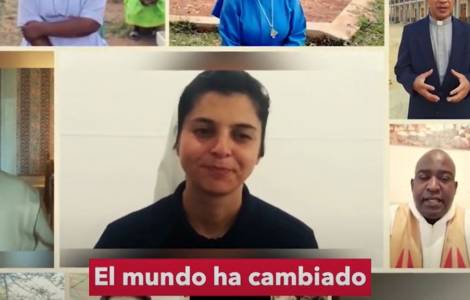 Madrid (Agenzia Fides) - Faced with the uncertainty caused by the pandemic, the missionary Church shows its unanimous will to remain on mission, among the people. The Pontifical Mission Societies (PMS) of Spain are launching an international video in which missionaries from all over the world and representatives of the local Churches of mission territories join their voices to send a message of hope to the world. This video, an initiative of various national Directions of the Pontifical Mission Societies, invites to "warm up the engines" on the way to World Mission Day, which will take place on 18 October around the world.
"The world has changed and everything seems uncertain ... Lives have changed ...". Thus begins the video #WeAreStilHere (# SeguimosAquí), which shows various missionaries and representatives of mission territories in a united way. "But let us tell you one thing: one thing is certain. We will not leave", it continues. "We will not give up, because we are missionaries. With God there nothing is impossible". They therefore conclude with an invitation to participate in their work.
The video collects the testimonies of leaders of ecclesiastical circumscriptions of mission territories, such as Cardinal Charles Maung Bo, Archbishop of Yangon (Myanmar), or the Spanish Jesuit Kike Figaredo, Apostolic Prefect of Battambang (Cambodia), and of missionaries of various nationalities. Among these is Spanish Father José María Cantal Rivas, who works in interreligious dialogue in Algeria; Sister Veronika, a Croatian missionary who is in the Solomon Islands, with the Buma community; Fr Anton, Maltese missionary in Guatemala, parish priest in the rainforest; Sister Francise, an Irish missionary in Pakistan, who works among the most marginalized in society.
Using different languages that show the universality of the Church - English, French, Italian, German, Spanish, Maltese, Swahili, Korean, Tagalog, Burmese ... - the missionaries send a single message: fidelity to the mission, even in adverse moments like the ones we are experiencing. "To have a mission is to love. And love makes it all possible. And that is why we will continue here". (SL) (Agenzia Fides, 9/9/2020)

EUROPE/GERMANY - Star Singers: "the faithful still want their Christmas blessing" even in times of pandemic