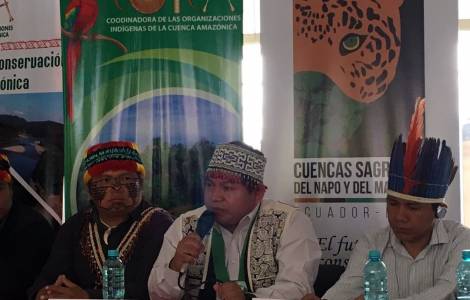 2020-09-16
The Bishops in the face of the health and social crisis: "Our commitment is the well-being of Peru"

2020-08-06
The bishops on the political crisis in the Country: "This is the worst time to cause a new crisis"

2020-07-28
Bishops' message for the national holiday:"It is necessary to assume responsibilities and commitments"

2020-07-21
First World Assembly for the Amazon: moratorium on mining

Iquitos (Agenzia Fides) - On Sunday 19 July, movements, groups and organizations of the indigenous peoples that make up the Amazon Basin asked the nine countries involved to apply a moratorium on mining activities in their territories in order to curb the "ecocide, ethnicity and extractivism" which, they stressed, "advance more than the Covid-19 virus". This was reported in the statement of the first World Assembly for the Amazon, which took place on Saturday 18 and Sunday 19 July, with the online participation of indigenous movements from Brazil, Bolivia, Peru, Ecuador, Colombia, Venezuela, Guyana, French Guyana and Suriname.
Ethnicide involves the death of peoples and their cultures; ecocide the death of nature and animals; extractivism the extraction of wood, legal and illegal, and minerals for international trade.
"No more a single drop of blood and pain from consumer products in the cities of the world. Forest communities, the countryside and cities are organized against devastation and hunger, which will continue after this pandemic, because ecocide, ethnocide and extractivism are progressing worse than the virus", said Fanny Cuiru of the Organization of Indigenous Peoples of the Colombian Amazon (OPIAC).
During the Assembly, there was also talk of the pandemic caused by Covid-19, and at least 20,000 have been reported infected with this disease, according to the Pan American Health Organization.
In this regard, Peruvian Cardinal Pedro Barreto, Jesuit, Vice-President of the Pan-Amazonian Network (REPAM), reaffirmed the commitment of the Catholic Church for the care of nature. "The time has come for the united Amazonian peoples to contribute to today's world with a sober, supportive and above all sincere lifestyle with respect for the human person, respect for cultures and respect for our nature", said Barreto. He also stressed that the Church is "an ally" of the Amazonian peoples. "With us we live and die with you if necessary", said the Peruvian Cardinal. (CE) (Agenzia Fides, 21/7/2020)

AFRICA/TANZANIA - Bishops to the government: "a social market economy" to eradicate poverty