EUROPE/ITALY - "Each of us has a reason to continue to remain united with Fr. Gigi Maccalli" 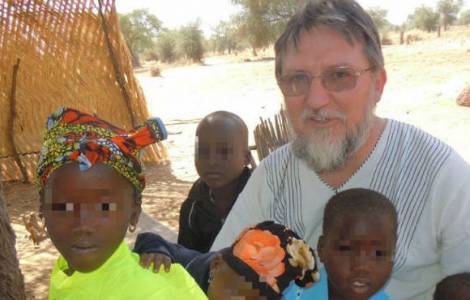 Padua (Agenzia Fides) - There are always many people who continue to pray and hope for the release of Father Gigi Maccalli, priest of the Society for African Missions, kidnapped in Niger on 17 September 2018. There are always testimonies of affection towards the missionary, among some of the testimonies on the occasion of the 22nd month since his kidnapping from the mission of Bomoanga, there is that of Silvia Sandon, consecrated to the Ordo Virginum of Feriole, in the province of Padua, who sent her experience of friendship with him to Fides. "From the day of the kidnapping of Fr. Gigi, - she writes – I often think about our last meeting which was at the end of July 2018, in Feriole. Gigi is the SMA father of my childhood, of the years of middle and high school, where some of the SMA retreat experiences were lived with the animators or the fathers were invited to the parish for their testimony. I always had the chance to see him when he passed through Feriole, many times they were unexpected surprises. I remember, with emotion now, some of our exchanged glances, that 'pulling' his beard as a sign of affection, smiles, prayers, hugs with a few tears when it was time to say goodbye, before his departure for Africa".
The consecrated woman stresses that "each of us has a reason for continuing to remain united to Fr. Gigi and nothing and nobody can take away this bond, the affection we have towards him and makes us hope, pray, believe that soon we will embrace it. In my heart I often dream of this moment, not as a thought that quickly fades, but with the certainty that God does wonders for his consecrated person and does not abandon any of his children. This is why I live Fr. Gigi in my daily life, with the conviction that he is alive and that every day he faces his captivity with strength, feeling all our closeness, knowing that he is not alone".
"Each of us continues to be united with him for a thousand reasons: dates and anniversaries, memories of lived experiences, offers of prayers in illness and suffering. This is what makes us brothers and sisters among Churches: with his mission land, among us who desire his release and who entrust ourselves to the infinite mercy of God the Father, asking that he intervenes in the heart of his captors.
'Courage and prayer' are the last two words that Fr. Gigi left me in July 2018 in a private message on facebook, and we offer these words to the Lord, on this occasion of the 22nd month of captivity. From that evening of 17 September 2018, prayer - Silvia concludes - unites us, gives us hope and strength". (SS/AP) (Agenzia Fides, 18/7/2020)

AFRICA/NIGER - 22 months after the kidnapping of Fr. Gigi Maccalli, man who used "the weapon of peace"

AFRICA/NIGER - A missionary: "I am leaving Niger, but not Father Maccalli: the mission continues with the mark of the cross"

AFRICA/NIGER - Two years after the kidnapping of Fr. Gigi Maccalli: "There is always, somewhere, someone who betrays friends"