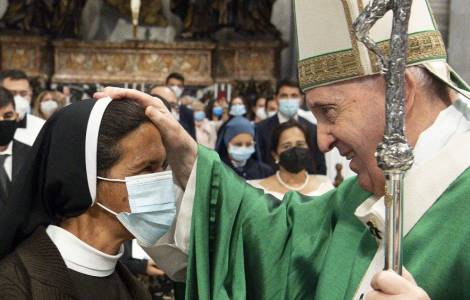 Bogota (Agenzia Fides) - Monsignor Mario de Jesús Álvarez Gómez, Bishop of Istmina-Tadó, president of the Commission for Missions of the Episcopal Conference of Colombia, confirmed on October 9, through a video message, the release of the missionary Sister Gloria Cecilia Narváez, kidnapped in Mali on 7 February 2017. She devoted herself to missionary work especially with the youngest (see Fides 10/10/2021). "As President of the Commission for Missions of the Colombian Episcopate, he said, it is with immense joy that I announce the release of Sister Gloria Cecilia Narváez, a religious of the Congregation of the Franciscan Sisters of Mary Immaculate, who was recently released in Mali, Africa".
Monsignor Álvarez Gómez thanked the Holy See, the Apostolic Nunciature of Colombia and the Episcopal Conference of Colombia for their efforts. "We give glory and blessing to God for this joyful moment of the universal Church and of the Church in Colombia", he concluded. The Colombian government has also expressed satisfaction with the release of Sister Gloria, according to reports from international agencies. Colombian Vice President and Foreign Minister, Marta Luc¡a Ram¡rez, stressed in a statement that it was "a goal that the national government had set itself and for which it worked with President Duque for many months, within the framework of multiple contacts and requests for international assistance, held personally with various leaders in Africa".
On February 7, 2021, four years after the kidnapping of the Colombian nun, "the Church continues to pray for her health and her prompt release", said Archbishop Francisco Javier Múnera Correa, Bishop of San Vicente del Caguán and president of the Commission episcopal for missionary animation. The Bishop re-launched the appeal for her release, for respect for her human dignity and for her religious status, dedicated entirely to the service of the most needy in mission lands. Expressing her encouragement and closeness to the religious of the Congregation of the Franciscan Sisters of Mary Immaculate, to which Sister Gloria Cecilia belongs, Múnera Correa reminded them that "the Bishops have not forgetten Sister Gloria Cecilia and ask for her immediate return". One year earlier, on February 6, 2020, during the work of the Plenary Assembly of the Colombian Episcopal Conference, three years after the kidnapping, Mgr. Mario de Jesús Álvarez Gómez, Bishop of Istmina-Tadó and member of the Commission for missionary animation, he forcefully affirmed: "No, we have not forgotten Sister Gloria Cecilia Narváez, we are united in the trusting prayer to God so that the Lord may touch the hearts of these people and the Sister may find freedom". (see Fides, 8/2/2021). (SL) (Agenzia Fides, 11/10/2021)