AFRICA/NIGER - 22 months after the kidnapping of Fr. Gigi Maccalli, man who used "the weapon of peace" 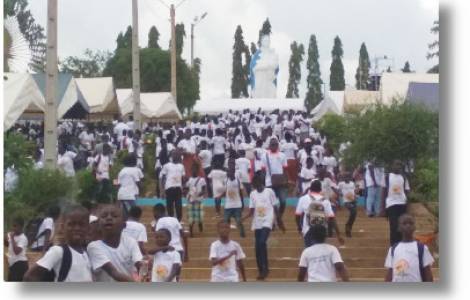 Niamey (Agenzia Fides) - "It is blindly believed that only through the use of weapons and spilled blood one can achieve peace: what happens in the Sahel, with the dead, injured, displaced, refugees or kidnapped, is a tangible and measurable example of this. But this is peace of arms, a peace of sand. Pierluigi always used exclusively the weapons of peace", writes Fr. Mauro Armanino priest of the Society for African Missions, 22 months after the kidnapping of his confrere Fr. Pierluigi Maccalli from the Bomoanga mission (see Fides, 18/9/2018). The confreres and the local Church await and continue to hope for his release, keeping the memory of the missionary's story alive.
"It is good to remember - writes Armanino - the 'weapons' that Fr. Gigi had imported into West Africa where he found himself fulfilling his missionary vocation. Already in Ivory Coast and precisely in Bondoukou, a town over 400 kilometers from the economic capital Abidjan, he had built a reception center for the disabled. Many people and in particular boys and girls had been able to get up and walk with dignity after being operated on their legs in the center of Bonoua", reports the missionary. "He drove them himself by car, after having accepted, recognized and convinced them to risk the journey for a possible recovery. They returned home and were able to walk again. His attention went to the sick, to those who did not have enough food and water to live with dignity, the priority of those who did not care about anyone because they were poor and farmers lost in the savannah on the border between Niger and Burkina Faso. Invisible citizens of a country that considers them 'doubly foreign' because they are mostly Christians".
In memory of his kidnapped confrere, Fr. Armanino concludes by stressing: "Gigi knew well that without justice, freedom, truth and dignity, no building site of peace could ever have seen the light. The 'Basilica' he was proud of and probably contributed to his kidnapping, was the Church, which finds the only wealth that is allowed, in the poor. In reality, his 'weapon' of peace was the poor. Now, in these 22 months of captivity, he is himself, precisely because he is defenseless, the most powerful weapon of peace he could ever bring to Niger". (MA/AP) (Agenzia Fides, 16/7/2020)

AMERICA/COLOMBIA - Four years after the kidnapping of Sister Gloria, "the Church continues to pray for her health and her prompt release"

AFRICA/MALI - The missionary kidnapped 4 years ago: "We ask the kidnappers to release Sister Gloria as soon as possible"

AFRICA/BURKINA FASO - World Day of leprosy: Camillian missionaries "alongside the last to announce the Good News"