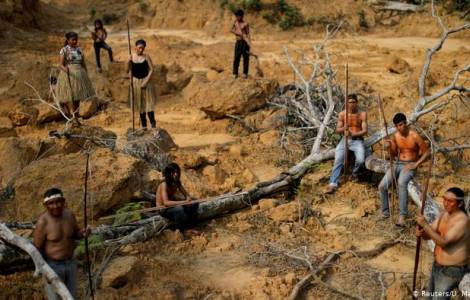 2020-11-19
Lay people active at the service of life and justice: national week of the laity

2020-11-17
Solidarity with Venezuelan migrants: reasons, suffering and proposals in a report by RED CLAMOR, UNHCR and CELAM

Brasilia (Agenzia Fides) - The Indigenous Missionary Council (CIMI) has publicly expressed its repudiation of the presidential vetoes expressed in the bill 1142/2020, approved by the Chamber of Deputies and the Federal Senate, which provides for urgent measures to support indigenous peoples due to the pandemic of the new coronavirus, written by the deputy Rosa Neide.
"The presidential vetoes reiterate the current government's prejudice, hatred and violence against indigenous peoples, of the quilombola and traditional populations, denying once again what the Constitutional Charter of Brazil supports in its fundamental principles, article 3, point IV: to promote the good of all, without preconceptions about origin, race, sex, color, age and any other form of discrimination".
The approved bill had sixteen important articles vetoed by President Bolsonaro, making it the most vetoed bill in the country's history. The vetoes are alarming, especially in times of pandemics, as they deny the fundamental rights and guarantees of traditional peoples' lives, such as access to drinking water, a universal good of humanity. In addition to access to water, essential items were vetoed that would guarantee access to intensive care beds, hygiene products, food distribution, among others, for the indigenous population.
According to the CIMI statement sent to Fides, "the President's justification for these vetoes is based solely on a lack of budget, which is contradicted by the recent approval of the proposed modification of the Constitution (PEC) 10/2020 by the National Congress. Known as the 'war budget', the amendment authorizes the expenditure necessary to combat the crisis generated by the new coronavirus pandemic".
The text continues: "The President disrespects the National Congress by vetoing a law that has already been passed almost unanimously, even by the parties of his support base. This presidential position demonstrates total insensitivity to the vulnerable situation of thousands of indigenous families, of quilombola and traditional communities throughout the national territory, which in this serious crisis condemns them to death".
This is why the text concludes with these words: "The Indigenous Missionary Council reaffirms its unconditional support for the indigenous and traditional populations in Brazil and for their right to life and " ife in abundance"(Jn 10:10)." The document is signed by CIMI with the date 8 July 2020. (CE) (Agenzia Fides, 10/7/2020)

AMERICA/UNITED STATES - Assembly of Bishops concluded: racism among the most debated topics