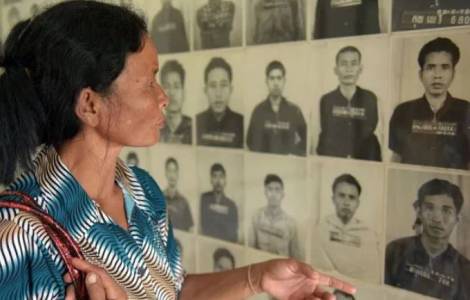 Phnom Penh (Agenzia Fides) - "Let us remember today the victims and the sufferings that occurred during the genocidal Khmer Rouge regime. Let us also remember our martyrs. And let us pray for peace, dialogue and reconciliation in Cambodia and in the world": is the message sent to Agenzia Fides by Bishop Olivier Schmitthaeusler, MEP, Apostolic Vicar of Phnom Penh, while on May 20 a Day is celebrated in Cambodia to commemorate the massacres committed by the Khmer Rouge and the Pol Pot regime. Cambodians define it "Day of Anger", and there are reconstructions or representations in various places in which students dressed in black recreate the harassment committed in the famous "Killing Fields".
But the Church wants to remember it and celebrate it as "Day of remembrance, of martyrs and reconciliation", rather than placing emphasis on feelings like anger and revenge. The Bishop explains to Fides: "This year we celebrate the 45th anniversary of the episcopal ordination of the first Cambodian Bishop, Mgr. Joseph Chhmar Salas, secretly ordained by Mgr. Yves Ramousse, on April 14, 1975, while the church of Notre Dame in Phnom Penh was being bombed. On April 17, 1975, the Khmer Rouge entered Phnom Penh and the entire population fled or was evacuated. Mgr. Chhmar Salas was brought to the northeast of the country, to Tangkauk, where he died in 1977. He is the protomartyr in the our list of 14 martyrs whose beatification cause has been ongoing since May 15, 2015".
The Apostolic Vicar adds: "This year we also celebrate the thirtieth anniversary of the resurrection of the Church in Cambodia: it was April 14, 1990 when Mgr. Emile Destombes celebrated Easter again in a cinema in Phnom Penh. It was a historic and great symbolic moment and of spiritual value: in the blackout of the dark years of the regime, the light of faith had not diminished and the flame of the paschal candle warmed and illuminated that dark room". "Today - continues Mgr. Schmitthaeusler - Catholics say with faith: Christ Jesus is alive! This is what we celebrated 30 years later, in our world invaded by the darkness of death, fear and solitude. We want to remember the last words of Mgr. Salas to Mgr. Ramousse, pronounced on April 17, 1975 before leaving for the dusty roads of Cambodia, which were: 'Talk about us to the world'. With this spirit we keep alive the memory of our martyrs and in Cambodia we live today the Gospel of peace and reconciliation".
During the Khmer Rouge regime, from 1975 to 1979, about two million Cambodians died due to executions, starvation or disease. Extermination camps dot the country, with over 20,000 mass grave sites containing over 1.38 million bodies, according to the Cambodia Documentation Center. The largest of the extermination camps was Choeung Ek, which is located on the outskirts of Phnom Penh and today serves as a monument to all those who died and survived, and to remind future generations of that immense suffering. Due to the proportions of the phenomenon and the impact on the total population, Cambodian extermination can be considered as an unprecedented case in the history of humanity. (PA) (Agenzia Fides, 20/5/2020)