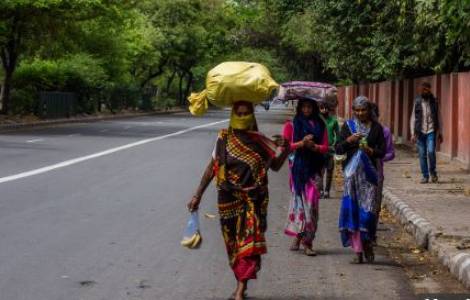 Ranchi (Agenzia Fides) - The Catholic Church of Ranchi, in Jharkhand, State of eastern India, has opened the first shelter for migrant workers and their families stranded in the district of Muri, on the border with West Bengal. And another 13 structures are ready to welcome others. The measure intends to accommodate the poor, migrants and workers who, in the midst of the nation's lockdown imposed to contain the coronavirus pandemic, have started to return to their original State, but often have not been able to reach it, becoming, "internally displaced persons".
We are talking about migrants, day workers, domestic workers, street vendors, rickshaw drivers, cleaning staff and unskilled workers who live below the poverty line. They work in various formal and informal sectors across the country, and are most affected by the closure of factories, businesses and institutions.
According to estimates by the Indian government, 450 million people out of 1.3 billion Indian citizens are "internal migrants" who have moved within the vast Indian Federation, looking for work. Most come from Uttar Pradesh and the eastern states of Bihar, Jharkhand, West Bengal, Orissa, Jharkhand and Assam. Thousands of them have tried to walk to their homes of origin, since state buses, taxis and trains have stopped to avoid the spread of the virus. Thousands of families are blocked in Jharkhand.
In such a scenario, the government of Jharkhand State has asked the Church for support to help give hospitality and care to these migrants, all workers who are blocked in the State, while they were heading elsewhere. The State Catholic Church has organized itself to provide shelter, food and basic services. "Among the 46 people welcomed, there are six women, a 3-year-old child, another one-year-old, and a three-month-old baby. One of the women is pregnant", says to Agenzia Fides Father Sushil Toppo, Secretary of the Archdiocese of Ranchi. The guests are accommodated in the shelter organized at the "Ursuline High School" in Muri, run by the Ursuline nuns. Each of those present was previously screened by local government medical authorities to rule out coronavirus positivity. The reception house is equipped to accommodate about 200 people, respecting the measures imposed to limit the infection.
The auxiliary Bishop of Ranchi, Mgr. Theodore Mascarenhas, together with the Provincial of the Jesuits, Fr. Joseph Marianus Kujur, and some priests, visited the refuge on the morning of April 4th. The Auxiliary Bishop praised the collaboration between civil and ecclesial authorities and, speaking with the guests, told them to "consider that as their home", assuring them that "they will be treated with love as brothers and sisters". He then confirmed that 13 other Catholic structures in the diocese have already been prepared by the local Church and await other migrants.
The population of the state of Jharkhand is 68.8% of Hindu religion, 14.5% of Muslim faith and 4.3% of Christian religion. (SD-PA) (Agenzia Fides, 7/4/2020)