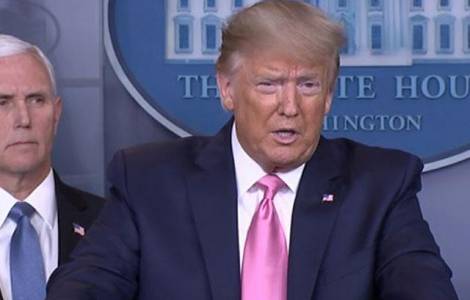 Brussels (Agenzia Fides) - The pandemic crisis caused by the coronavirus makes it even more urgent and necessary to suspend the economic sanctions imposed by the US Administration against Iran, Syria and the Gaza Strip, which contribute to sow suffering and poverty among the populations in those areas. This is the appeal launched by Pax Christi International in an open letter addressed directly to US President Donald Trump, made known on Monday 30 March.
The Catholic organization, with its headquarters in Brussels, points out in its message that these regions affected by US economic sanctions are already suffering desperate shortages of food, clean water and medical supplies and if sanctions continue the impact of the pandemic will be devastating.
"As an international Catholic network with 120 member organizations around the world, we are hearing directly from our partners that daily life for people was already tenuous for many in places such as Iran, Syria, and Gaza and these realities have only become more difficult as a result of COVID-19".
Pax Christi asks Trump to ease and suspend sanctions that negatively impact civilian populations and other restrictions that impair governments' abilities to respond to the health crisis.
The US President (see photo), on Friday 20 March, joined Vice-President Mike Pence at a "prayer conference call" organized by 700 evangelical pastors to invoke the strength to overcome the coronavirus epidemic.
The punitive measures imposed by U.S. sanctions against the governments of those areas - Pax Christi's appeal points out - also include financial sanctions that seriously affect the ability of countries to import supplies and medical equipment necessary to deal with the consequences of the pandemic.
The document sent by Pax Christi also goes into the specifics of individual emergency situations. Regarding Iran, it is recalled that the coronavirus epidemic has already had "a devastating effect" in the Country. Long preceding the current crisis, sanctions have caused a shortage of medicines, medical supplies and equipment in Iran.
It is recognized that some steps have already been taken, including allowing humanitarian trade with the Central Bank of Iran. But US sanctions are so sweeping that they impact Iran's entire economy, have made banks unwilling to carry out humanitarian transactions, and make it difficult for other countries to carry out transactions without triggering secondary sanctions.
As regards to Syria, reference is made to the "potential" consequences that the epidemic could have in a Country where 11 million inhabitants (including 6.2 million internally displaced persons) need humanitarian assistance to survive. And where the imposition of radical sanctions makes the purchase of medicines and medical supplies difficult, in a country where even the health system has been devastated by years of conflict. In Gaza - reports Pax Christi - the strict Israeli blockade of Gaza has already made conditions "unlivable" for the residents of Gaza, apart from COVID-19. The UN and other international agencies have repeatedly called attention to shortages of key medicines and medical supplies.
Population density, broken water and sanitation systems, and a under resourced medical system leave Gaza vulnerable to an uncontrolled COVID-19 outbreak that could also negatively impact Israel. The US should immediately press Israel to ensure that medical supplies and technology are provided to Gaza, that patients needing treatment outside of Gaza are given the permits necessary for extended periods of treatment, and that family members, especially parents accompanying children, are also granted permits to travel.
Pax Christi's message, signed by all leaders - starting from President Marc Stenger, bishop of Troyes -, by members of the International Council and by national groups (including Pax Christi USA), ends with the promise to pray for wisdom and the compassion of President Trump, "in these difficult times." (GV) (Agenzia Fides 31/3/2020).