AMERICA/CANADA - Archbishop Dal Toso to the Bishops: "It is not enough to simply say that the Church is missionary, but we must affirm the objective of the mission" 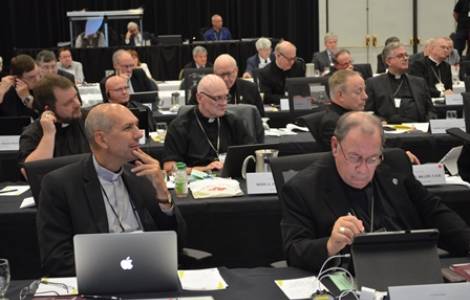 2019-09-24
Archbishop Dal Toso to the Bishops: "It is not enough to simply say that the Church is missionary, but we must affirm the objective of the mission"

Cornwall (Agenzia Fides) - "It is not enough to simply say that the Church is missionary, but we must affirm the objective of the mission, which is ad gentes, to the peoples, to each person, to bring the announcement of faith, that is, Christ who died and rose, and to establish new Christian communities". This was underlined by Archbishop Giampietro Dal Toso, President of the Pontifical Mission Societies (PMS), who expressed all his gratitude for the invitation to address the Plenary Assembly of the Bishops' Conference of Canadian Bishops, which takes place from 23 to 27 September at the Nav Center, Cornwall, Ontario.
Focusing in particular on the nature of the mission, the Archbishop reiterated the validity of what the Second Vatican Council affirms in the Ad gentes missionary decree, highlighting that "in the past, mission was sometimes wrongly interpreted to be aid for development", and this caused some problems in Canada because "what began as support to the mission, turned into aid for development".
"In my opinion, the decades that separate us from the Council have not diminished - the President of the Pontifical Mission Societies continued -, but, on the contrary, have highlighted the need for the mission and the mission ad gentes, that is, to reach those who do not know Christ. We all know that the missionary nature of the Church has been of great concern to the Holy Father since his programmatic document, where he says that missionary activity is paradigmatic for every activity of the Church. But I would also add that reality itself is imposing the need for the missio ad gentes. This is clear if we consider the statistics: in England, 53% of the population affirms not having any religious affiliation; in Germany, a survey predicts that in the year 2060, Christians will be reduced to half the current number, mainly because young people between the ages of 25 and 40 no longer baptize their children. Therefore, even in the West, the reality of the facts compels us to the missio ad gentes, that is, to the proclamation of the faith to those who do not believe".
Inherent to this concept of the missio ad gentes is the exchange of missionary personnel, which, in the past, the Canadian Church would send out and, currently, mainly receive. "In fact, the mission is a privileged field in which the relationship of mutual enrichment between the universal Church and the local Church is made manifest - underlined Archbishop Dal Toso -. If it is true that the universal Church is concretely found in the local Church, it is also true that the local Church cannot exist without the universal Church. This mutual relationship prevents the local Church from closing in on itself and becoming a national Church. The more the local Church opens up to the mission, the more it discovers that it is a universal Church, open to the needs of all men. Indeed, the missionary activity demonstrates that no Church is autonomous, but rather lives in the vital flow that unites it to all the Churches".
Therefore the President of the Pontifical Mission Societies focused on this universal-local relationship, "opening ourselves to the universal Church and to its needs not only enables us to give, but also to receive. At this point, I would like to stress that the episcopal ministry itself, according to the Council, must be considered in this light".
The charisma of the Pontifical Mission Societies, "a worldwide network at the service of the Pope to sustain the mission and the young Churches through prayer and charity" is found in this broad vision of missio ad gentes and of the relationship between local and universal of which the Archbishop illustrated the origins, goals and structure, highlighting their profound relationship with the diocesan pastoral care.
Dwelling on missionary cooperation between dioceses, Mgr. Dal Toso highlighted that it "cannot replace the universal missionarity that the Successor of Peter serves as Universal Pastor" and that "human mobility also brings new life to our Churches of ancient tradition". However, he pointed out that "the welcoming of priests and religious in Western countries must be paired with serious accompaniment" and that agreement between the Bishop a quo and the Bishop ad quem "should also include a limited duration of such service", as "we cannot impoverish the mission territories of the clergy that they themselves still need".
In the concluding part of his speech, the Archbishop focused on the Extraordinary Missionary Month of October 2019, illustrating its historical genesis, theological-pastoral motivation and some practical aspects. "At times, in fact, one can be tempted to consider the mission only as one of the Church’s many dimensions - said Mgr. Dal Toso -, nevertheless, the mission is essential, and it is important to understand the connection between ordinary pastoral activity and missionary pastoral activity. Missionary awareness is not something separated from pastoral care, but it is in some way its culmination. This is ultimately the goal of our PMS, and the Missionary Month is an extraordinary opportunity for this: to help the ordinary pastoral activity of the Church find new strength in this missionary dimension that makes it go beyond itself". (SL) (Agenzia Fides, 24/9/2019)

AMERICA/COLOMBIA - "With Mary, beyond borders": the preparation of the National Missionary Congress proceeds