VATICAN - Cardinal Filoni to the Bishops of Thailand: "a new missionary momentum is needed" 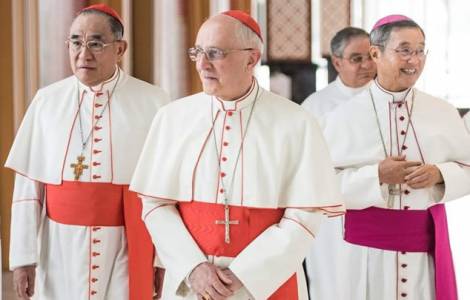 Bangkok (Agenzia Fides) - "This historic moment of the 350th anniversary of the beginning of the establishment of the hierarchy brings to our attention the need for a new missionary momentum. The pioneering efforts of the missionaries who had brought the Good News of Salvation to the Thai people should continue. The missionary formation is now the task of the local Church. This work should be seen as central to the mission of the Church in Thailand. Therefore, every effort at evangelisation should be a key element in the pastoral activity of the religious institutes, parishes, schools, lay movements, and especially youth groups in your particular churches". This is what the Prefect of the Congregation for the Evangelization of Peoples, Cardinal Fernando Filoni emphasized, during the meeting held today with the Bishops of Thailand, where he is on a pastoral visit for the 350th anniversary of the Apostolic Vicariate of Siam (see Fides 15/5/2019).
The Cardinal brought the blessing of the Holy Father and the assurance of his closeness on this important anniversary, he therefore recalled "the contributions of so many missionaries coming from various countries" and that "the beginnings of evangelisation had not been easy; there were persecutions", finally expressing particular appreciation for "the efforts taken by you all as Pastors for the Churches entrusted to your pastoral care".
In his speech, the Prefect of the Missionary Dicastery proposed a reflection on some issues related to the episcopal ministry to the Bishops. First of all, he pointed out that "the unity of the Episcopal Conference enriches the collegiality of the Bishops for the growth of the Church in Thailand". "This fraternal communion among you - he underlined - should be an inspiration for the priests, religious and the Christian faithful in the Church".
Pope Francis reiterated that "the Bishop as a successor of the Apostles is called to preach the Gospel", the Cardinal continued, and the Pope "has asked all the Churches to commit themselves without any reservation to evangelisation as the first work in our time and has therefore announced the coming month of October as an Extraordinary Missionary Month in order to make known to every baptised person of this duty or, rather, common vocation".
In this regard, the Cardinal Prefect recommended the Bishops to make sure that "true catholic theology of mission" is imparted in the seminaries and religious houses of formation, and expressed his gratitude and that of the missionary Congregation for the progress made so far in the area of missionary engagements in the dioceses, in particular, the catechists, and other lay workers who work so willingly with their pastors in the mission stations.
"The role of the Pontifical Mission Societies - he said - could be encouraged at the diocesan level in order to better coordinate and further promote missionary activities at the parish level, under the supervision of the diocesan Director of the Pontifical Mission Societies".
Another theme of particular importance on which the Cardinal dwelt was that of vocations and the formation of priests, on which the future growth of the Church depends: "The priestly mission is so important that it requires continuous attention because the Catholic communities have to face various challenges in an ever changing society". Even the Christian family should become "a privileged place for evangelical witness". It is obvious that the Christian faithful must receive the necessary formation not only in relation to marriage and family but also "in relation to the sacred vocation of the Christian family in today’s society, as a domestic church". The role of Catholic schools "is vital to the Christian families in providing a true Christian formation to their children". Cardinal Filoni recalled with gratitude "the contributions being made by the Catholic schools in the area of education" and continued: "The role of Catholic schools in Thailand for human and Christian formation has been very significant and praise worthy. I am thankful to the various religious institutes as well as the dioceses that are involved in this worthy apostolate. Furthermore, Catholic schools can also be agents of mission".
In the concluding part of his speech, the Prefect of the Missionary Dicastery spoke with the Bishops about some themes of actuality that in particular touch Thailand and the Church's evangelizing mission: the dialogue with the Buddhist world, understood at all levels, which "remains as the basic attitude in which every moment of our missionary activity should be closely linked"; the world phenomenon of migration particularly relevant in the context of Thailand; finally, the protection of minors, another relevant theme in the context of this Asian country. (SL) (Agenzia Fides, 17/5/2019)

VATICAN - Vocations increase in mission territories, their formation is the responsibility of the whole Church