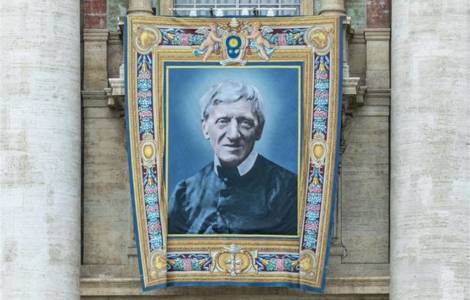 Vatican City (Agenzia Fides) - "On the eve of the canonization of Cardinal John Henry Newman, this day dedicated to the study of the Blessed introduces us not only to the better knowledge of the multiform, extraordinary, human, theological and priestly personality of this illustrious Son of Great Britain, but also to tomorrow morning’s solemn celebration". With these words, Cardinal Fernando Filoni, Prefect of the Congregation for the Evangelization of Peoples, introduced the works of the study meeting entitled "Cardinal Newman: a celebration", promoted by the Congregation and by the British Embassy to the Holy See, which took place on Saturday 12 October at the Casina Pio IV in the Vatican.
Introducing the work, which examined three aspects of the complex personality of Newman, "theologian, educator and priest", Card. Filoni underlined that the process of the cause of canonization allowed to highlight "also his excellent qualities as a man of God and the Church", and he recalled that Newman "was also a guest of our Pontifical Urban College, among whose walls he was formed to the Catholic doctrine and refined his spirit of prayer".
"Someone said that he would have been an «absent Father» of the Second Vatican Council - said Cardinal Filoni -; instead, according to the thought of Paul VI, Newman was invisibly at the center of Vatican II (J. Guitton). In fact, he was faithfully present with his teaching, perceived in some documents (I recall, in particular, the Declaration Dignitatis humanae, where the primacy of conscience and the search for truth are welcomed). Today the Catholic Church recognizes not only the value of her ecclesiological thinking, but also the importance of his holiness of life. I would define him, in patristic terms, the Augustine of modern times".
In the solemn Mass of canonization, celebrated on Sunday 13 October in St. Peter's Square, Pope Francis in his homily said: "Today we give thanks to the Lord for our new Saints and referring to the "the holiness of daily life, which Saint John Henry Newman described, he quoted his words "the Christian has a deep, silent, hidden peace, which the world sees not. […] The Christian is cheerful, easy, kind, gentle, courteous, candid, unassuming; has no pretence. […] with so little that is unusual or striking in his bearing, that he may easily be taken at first sight for an ordinary man” (Parochial and Plain Sermons, V, 5). The Pope concluded: " Let us ask to be like that, “kindly lights” amid the encircling gloom. Jesus, “stay with me, and then I shall begin to shine as Thou shinest: so to shine as to be a light to others” (Meditations on Christian Doctrine, VII, 3). (SL) (Agenzia Fides, 15/10/2019)