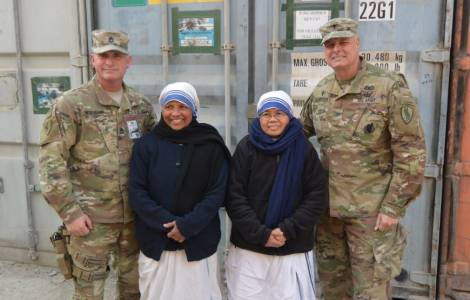 Kabul (Agenzia Fides) - "Living immersed in an environment like that of Afghanistan, one feels the need, sometimes, to be together, to pray, to share thoughts, to nourish fraternal relations: this is why after Christmas we will meet again, among the religious present in this country, not only to pray together, but also to spend a few hours of serenity and sharing". This is what Fr. Giovanni Scalese, religious Barnabite titular of the Missio sui iuris of Afghanistan.
The presence of Christian religious in the Afghan territory is exclusively linked to charitable or military realities: in fact, they are missionaries engaged in humanitarian initiatives and who are not allowed to carry out evangelization activities, or military chaplains, "always insufficient with respect to the needs", says the Barnabite. The only Catholic parish in Afghanistan is located inside the Italian Embassy in Kabul and is attended by about one hundred people, almost exclusively members of the international diplomatic community.
"How is this small community preparing itself for Christmas? In simplicity.
We started our preparation at the end of November; On December 2nd we blessed the Advent wreath and lit its first candle, to begin the special time of preparation for the coming of Christ. On Sunday, December 16, we lit the Christmas tree in front of the church and started the traditional novena awaiting the birth of Jesus", reports Fr. Scalese.
The conduct of Catholic liturgies is affected by the strong tensions of a country at war for 40 years. In fact, the Barnabite explains: "On December 24th the Nativity will be announced with the song of Kalenda and, during the Christmas Mass, the nativity scene will be blessed. But all this will take place in the late afternoon, as it is not possible, for security reasons, to celebrate at night".
On Christmas Day, Holy Mass and the apostolic blessing will be celebrated at the NATO base and in the church of the Mission: "There will probably be more faithful participation than usual: the festivities represent, in fact, an occasion of prayer also for those who hardly participate in the life of the church during the rest of the year", concludes the Barnabite.
In Afghanistan, the 2004 Constitution defines the country as an "Islamic Republic", while Article 2 of the Charter guarantees non-Muslims the right to freely exercise their religion within the limits of the laws in force.
In addition to the parish of the Italian embassy and military chaplaincies, the inter-congregational organization of women religious "Children pro-Kabul" and the Sisters of Mother Teresa of Calcutta are operative in the Afghan territory. Until 2016, the Little Sisters of Charles De Foucauld lived in the Afghan capital. The Indian Jesuits of the Jesuit Refugees Service and other Christian-inspired organizations are also involved in social and educational projects launched in the country. (LF) (Agenzia Fides, 20/12/2018)

AFRICA/EGYPT - Al Sisi at the vigil of Coptic Christmas: "If we love God, we must love each other"

AFRICA/DR CONGO - A Carmelite: "The Congolese Church plays a fundamental role in the pacification process of the Country"

OCEANIA/AUSTRALIA - Towards World Mission Day: a thousand faces for mission

EUROPE/SWITZERLAND - Towards World Mission Day: support for missionaries who "remain" and announce the Gospel in difficult situations