AMERICA/BOLIVIA - Mission continues: after CAM, towards the Extraordinary Missionary Month 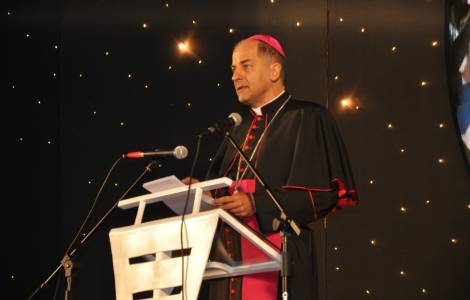 Santa Cruz de la Sierra (Agenzia Fides) - "Prayer, proclamation of the Gospel, biblical and theological reflection, catechesis, works of Christian charity and solidarity among the Churches, should allow a missionary reawakening, helping all the faithful to have a true and passionate encounter with Christ the Lord". It is with this spirit that Pope Francis has accepted the proposal of the Congregation for the Evangelization of Peoples and of the Pontifical Mission Societies in convening an "Extraordinary Missionary Month", scheduled for October 2019. Archbishop Giampietro Dal Toso, President of the Pontifical Mission Societies underlines this in his speech this morning, 14 July, to the Bishops of the Americas present at "CAM 5", the American Missionary Congress which closes today in Santa Cruz de la Sierra, Bolivia.
At the end of the Congress, the Church in America, in harmony with the universal Church, is projected, therefore, towards the next great missionary appointment, October 2019, celebrated worldwide, on the occasion of the 100th anniversary of the Apostolic Letter "Maximum illud" of Pope Benedict XV. The aim is "to evangelically requalify mission", so that "every baptized person can burn more and more with the same love of Jesus Christ, so that everyone can receive the gift of salvation", remarked Mgr. Dal Toso. In particular, in the New Continent, the event coincides with another important appointment: the Synod of the Amazon, a forum which assumes, therefore, a strong missionary connotation.
The Archbishop indicated the four fundamental dimensions that will characterize the Extraordinary Missionary Month: the personal encounter with Jesus Christ; the testimony of saints and martyrs of mission (canonized or not); missionary formation; missionary charity. Pope Francis entrusted the Congregation of Propaganda Fide "the task of preparing this event, in particular through the widespread awareness of the particular Churches", indicating the theme: "Baptized and sent: the Church of Christ on a mission in the world".
"The motto - underlines the President of the PMS - already contains the essential elements: mission stems from baptism, which sends us into the world within the Church to bring the proclamation of Christ crucified and risen. This is why it is a month that concerns every baptized person who, as such, is a missionary".
Pope Francis in "Evangelii Gaudium" recalls that "missionary outreach is paradigmatic for all the Church’s activity" (EG 15): "the universal Church and particular Churches, men and women religious, laity and clergy, ecclesial movements and new forms of lay associations are all involved in this conversion and renewal of the missionary identity of the Church", notes Mgr. Dal Toso.
To this end, the Congregation for the Evangelization of Peoples is preparing a Guide, on paper and digital support, for the missionary animation of October 2019, thanks to human resources and contributions from all over the world. The Guide, in five languages, in the first part contains comments on missionary spirituality for the readings of the Liturgy of the Mass in October 2019. The second part suggests thirty figures of saints, martyrs and witnesses of faith and mission. In the third part there are some theological considerations on the themes of formation and of missionary charity. (PA) (Agenzia Fides, 14/7/2018)