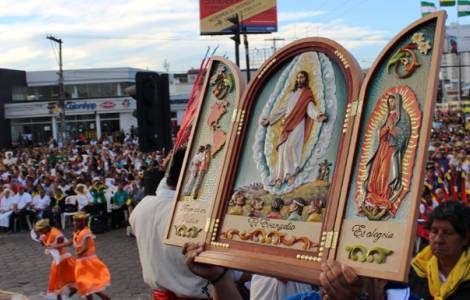 2022-12-17
Ministry of the "missionary" Catechist: criteria and formation itineraries of Episcopal Conferences

2022-12-07
From the first Latin American Church Assembly to the Synod, for a greater capacity for evangelization

2022-12-03
More than 7 million people forced to flee their countries in Latin America: a joint effort by Red Clamor and UNHCR is needed

Santa Cruz de la Sierra (Agenzia Fides) - The reception of families and the organization of the Pontifical Mission Societies (PMS) of Bolivia and the local Episcopal Conference were the key to the success of the 5th American Missionary Congress (CAM 5 ). According to the National Directors of the PMS of Venezuela, Fr. Ender Zapata, and of Mexico, Fr José Ayala, consulted by Agenzia Fides, both allowed a profound reflection, a joyful sharing of "missionary passion" and a precious experience of a home to home mission, carried out on the last day, through which the missionaries were able to "touch reality".
Among the voices regarding an initial assessment of the continental missionary event, both add the proposal for a "more ministerial rather than clerical" mission and, in particular, to ensure that women obtain a presence in decision-making areas. D. Ayala considers that in many places this is happening, "but it should be done with greater formalities and that women have a mandate from the Church, since most of the people who work there are females, in all areas". "Women have always given continuity to evangelization and to the life of faith in families, and they work for the Church on a missionary basis every day" remarks d. Zapata. "They do not exist just to put flowers or remove tablecloths. Most of us received faith from our mother or grandmother".
CAM suggested giving them the ministry of acolyte, a solution that does not convince everyone. The PMS Director of Brazil, Fr. Maurício Jardim, explains to Fides that all this "emerged very strongly, especially in a conference that was very applauded". "It is mainly women who bring the Gospel", said Jardim, echoing the words of the aforementioned conference, in which Mgr. Santiago Silva was inspired by the missionary model of St. Paul and his companions, "and without women, today this would be almost unthinkable".
CAM 5 highlighted a Church that is present, active and concerned with the serious situations experienced in Nicaragua, Haiti and Venezuela, and with the US policy of separating children from migrant parents. For the Church, reflects Venezuelan PMS Director, "these situations are also opportunities to witness and stimulate the option of a living and risen Christ who becomes supportive and present in a reality that speaks of death, violence and injustice".
D. Ayala and d. Zapata unfortunately note "the little time dedicated to reflection on the mission Ad gentes". "A sign of the fact that the Church in America does not assume it in a concrete, real and generous way". "Our countries, which have received the gift of the Gospel for more than 500 years, are struggling to send missionaries out of the continent and even to our indigenous peoples, to give continuity to evangelization". And "Latin America, which received so much in terms of proclamation of the Gospel – says don Jardim - could send missionaries even in de-Christianized areas, which exist in Europe".
Even the Afro-world, Zapata says, "was totally absent from the reflection. The deepening of the indigenous mission should have been greater, because it is a sector lacking adequate missionary pastoral care", also due to the decrease in vocations and aging of missionaries from abroad. However, "the absence of missionaries is generating a new lay ministry, of which however, according to d. Zapata, not much was said. Also the testimonial aspect "could have enriched CAM a lot". "We cannot ignore this aspect, because a missionary Congress is not just reflection, it is also revitalization".
In this regard, d. Ayala recalls what was highlighted in those days: "It is a matter of sharing with others the encounter with the person of Christ and of encouraging them to have an encounter with him. If this is only a reference, an idea, we cannot be witnesses. And Paul VI said that people listen more carefully to witnesses than to teachers, for example, saints continue to be effective above all for their witness".
The Mexican delegation greatly enhanced the mission accomplished at the end of the Congress. "It was proven that the Lord makes use of many things to make us meet Him, in addition to mass or retreat. The delegates got to see reality: a lot of poverty, sometimes a lot of abandonment, it is striking to meet Christ down there, alone and abandoned".
This caused feelings of powerlessness, but also awakened the desire to engage in the mission.
The three National Directors consider it necessary to promote greater sending of Fidei donum missionaries to neighboring ecclesiastical districts, such as the Venezuelan Apostolic Vicariates, one of which, in the Amazon, has only a Bishop, three priests and four religious women. The National Episcopate has decided to implement the "tenth missionary", which involves sending missionaries to needy Churches.
Don Jardim emphasizes the need to translate the CAM conclusions into plans and actions: "In order to nourish the missionary spirit we should take advantage of the Synod for Youth and World Youth Day - suggests D. Ayala - also as preparation for the extraordinary Missionary Month of October 2019". (SM) (Agenzia Fides, 25/7/2018)