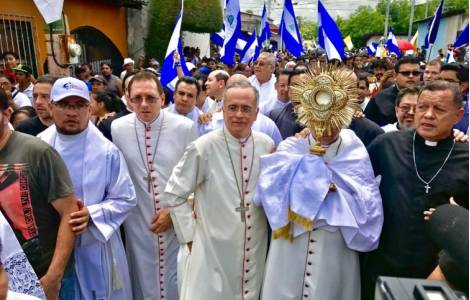 Masaya (Agenzia Fides) - The church bells of the city of Masaya rang without stopping, not to warn of the arrival of death squads, formed by police and paramilitaries, but this time with a reason for hope: the arrival of some members of the Episcopal Conference and of the Apostolic Nuncio who yesterday, after learning that Masaya had been attacked once again at 5 am, arrived almost immediately on the spot, to stop the massacre. It was very risky, but seeing the Bishops march down the street, the whole population came out of their houses and joined them. All together, in silence, made the police move away from the streets hastily.
After greeting the people, the Bishops made a short procession with the Blessed Sacrament together with the clergy of Managua and Masaya. Then the Bishops went to the police station from where the attacks on civilians were ordered, commanded by Commissioner Ramón Avellán, accused by the population of being responsible for the massacres in recent weeks. After more than an hour, Cardinal Leopoldo Brenes, Archbishop of Managua, wanted to inform the population: "Commissioner Avellán has committed himself to stop all violence, I told him that if this does not happen, I will call him later". Cardinal Brenes has always appeared accompanied by Archbishop Waldemar Stanislaw Sommertag, Apostolic Nuncio in Nicaragua. Moreover, the Church seems to have succeeded, at least on the word, to have the commitment of Avellán for the release of all the detainees of Masaya, Nindirí, Masatepe and Ticuantepe, who were stopped for political reasons in recent days.
A little later, in front of a large crowd of people, Mgr. Baez, Auxiliary Bishop of Managua, reminded the population that "there is a commandment of God for all: not to kill". The Nuncio told the people: "The Holy Father is informed of what is happening here in Nicaragua". He then urged the population in Masaya not to use violence, urging everyone to believe in God as a means of overcoming violence.
On April 18, Nicaragua began its most cruel crisis since the 80s, which began with demonstrations against social security reform becoming a national cry for democratic changes. So far, more than 170 Nicaraguans have been murdered in clashes and repressions, including an entire family that was burned alive in Managua. (CE) (Agenzia Fides, 22/6/2018)