AMERICA/NICARAGUA - "National Dialogue" begins: the Church is mediator and witness 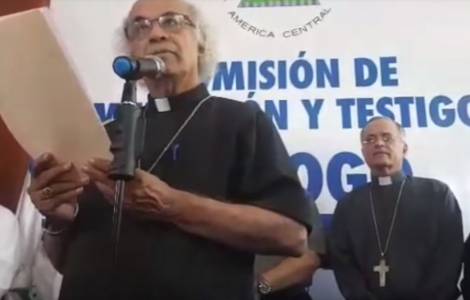 Managua (Agenzia Fides) - The Catholic Church in Nicaragua, through the Episcopal Conference (CEN), has announced that "National Dialogue" in Nicaragua will begin on Wednesday 16 May. In his announcement, Cardinal Brenes emphasized the role of the Church as "a mediator and witness", but at the same time he pointed out the topic to be discussed: "the institutionalism of the country to move towards democratization". Cardinal Brenes, Archbishop of Managua, read the statement prepared by CEN representatives and said that "the conditions for dialogue are not the best, but dialogue will nevertheless take place in Nuestra Señora de Fátima seminar". Yesterday Cardinal Brenes recalled that important agreements must be reached in this dialogue, but the violence that rages on the streets of some cities must be immediately stopped.
Agenzia Fides had published the contents of the Bishops’ letter to President Daniel Ortega, with the four conditions in order to continue the dialogue: to allow the entry of the Inter-American Commission for Human Rights in the country; to stop the action of paramilitary bodies; to stop repression and give credible signs of willingness to dialogue (see Fides 4/5/2018), simply to accept to act as a mediator in this National Dialogue.
The Nicaraguan Cardinal added that he was saddened by the news of the clashes that occurred in recent days in Sébaco and Matagalpa, demanding that all violence be stopped. On Saturday 12, vice-president Rosario Murillo, Daniel Ortega’s wife, replied to the Episcopal Conference, accepting the conditions: "We are ready to materialize the appeal for dialogue as soon as possible, for the tranquility of all Nicaraguans". However, on the same day of Saturday, the special forces carried out a new action of violent repression in the city of Masaya, the cradle of folklore and craftsmanship of the country, causing two victims and a hundred were injured. On Sunday, May 13, the priests called for calm in many parishes, without ceasing to continue to support the people who want a real democratization of the country.
The country lives hours of tension and uncertainty: even if through their representatives, students and entrepreneurs confirmed their presence at the table of dialogue, the people do not trust the authorities because of the continuing repression of the military forces of the government .
From his Twitter profile, the Auxiliary Bishop of Managua, Mgr. Silvio José Báez, revealed that, despite priests continue to receive intimidation and telephone threats, "we must not allow ourselves to be overwhelmed by irresponsible emotion and rage and not even from fear and even less from violence".
The question of inviting the "Inter-American Commission for Human Rights" to investigate acts of violence during protests, which have caused the death of over 60 people, remains open. (CE) (Agenzia Fides, 15/05/2018)

AFRICA/CAMEROON - Bishops warn of increases in drug abuse in schools