ASIA/INDONESIA - Attack on a church: is extremism threatening Christians? 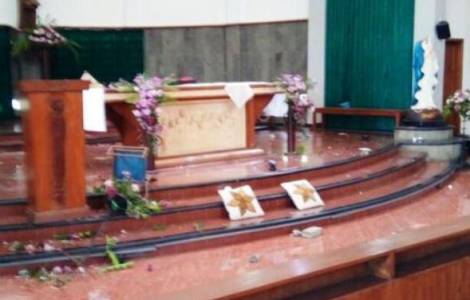 Yogyakarta (Agenzia Fides) - Fear and consternation in the Indonesian Catholic community after the attack suffered yesterday, 11 February, during Sunday Mass in the church of San Lidwina, in the district of Selman, near Yogyakarta, a city in the center of the island of Central Java. An unbalanced man named Suliyono entered the church and wielded a cutting weapon with which he wounded a dozen faithful and a Jesuit priest of German origin, father Karl-Edmund Prier, who was celebrating mass at 7.30 in the morning.
"He was wielding a sword, and he hit me", said Permadi, the first victim, who was hit in the back. Other faithful were hit on the head and the attacker managed to reach the altar, wounded the priest and destroyed some statues of Mary and Jesus. A parishioner called the police who tried to talk with him and tried to arrest him. At his refusal an officer fired and severely wounded him. The man was taken to the hospital. Little is known about him, but only that he is a resident of Banyuwangi, East Java. A police investigation is underway to ascertain the reason for the attack.
"We strongly condemn episodes of violence during the Eucharistic celebration.The Eucharist is the culmination of the life of the Catholic Church. During the Eucharist the whole community celebrates the saving work of Christ himself and experiences the encounter with God through the Holy Communion", reads a statement by Father Endra Wijayanto, at the head of the "Justice and Peace" Commission of the Archdiocese of Yogyakarta, and sent to Agenzia Fides. The local Church calls on the police to "guarantee protection and security to churches" and to assume "a proactive attitude to prevent further episodes of violence, protecting the fundamental rights of all Indonesian citizens, without exception".
The text exhorts to "actively support the values of Pancasila and the Constitution of 1945, which guarantees freedom of religion and worship, the protection of human rights for Indonesian citizens", and calls on Christians to "continue to promote peace and justice", maintaining "social order, in order not to create chaos", and to ensure that "the nation remains peaceful and harmonious".
In the same region, the Catholic parish of St. Paul in Bantul district in past days had organized a humanitarian mission of charitable aid and free medical treatment for the poor, but a Muslim fundamentalist group blocked it by accusing the Christians of an alleged attempt to proselytism.
According to observers, attacking Christians and other religious minorities could be a politically motivated phenomenon in order to polarize society on an ethnic and religious basis: some political groups, in fact, could make political use of religion and foment instability to gain political advantage, in view of the administrative elections scheduled for September 2018, and of the presidential elections in 2019.
Zeid Ra'ad al-Hussein, UN High Commissioner for Human Rights, said that in the country "increasing levels of extremism are accompanied by incitement to discrimination, hatred or violence", fueled by "populism and political opportunism". Zeid Ra'ad al-Hussein, who is a Muslim, warned that "dark clouds of political extremism and intolerance are threatening Indonesia". (SD-PA) (Agenzia Fides, 12/2/2018)