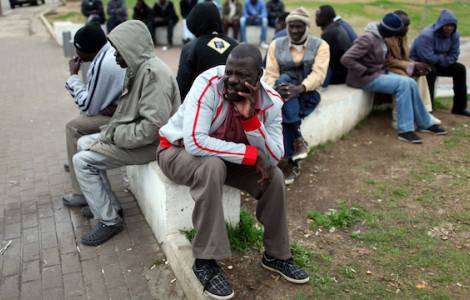 Jerusalem (Agenzia Fides) - "Israel has found a drastic way to solve the problem of African immigrants: it will pay Rwanda to welcome them. Some use the verb 'sell' to describe the policy launched by Benjamin Netanyahu’s government. Is this not a business of human beings?". This is how Sister Azazet Kidane, an Eritrean Comboni religious who has been working in the Jewish State alongside migrants for years, espresses her sadness. Since the beginning of the year, the Israeli government announced that it signed an agreement with Kigali to encourage the expulsion of many Africans to Rwanda (upon payment of a sum for every migrant). Even the Heads of Catholic Churches of the Holy Land, in a text published in recent days (see Fides 22/1/2017) express perplexities regarding the recent provision put in place by the Israeli government.
"Starting from 2011 - explains Sister Kidane - the flow of African migrants to Israel has increased. Faced with this phenomenon, the government initially transferred Africans to open prisons, where they left in the morning and returned in the evening. African boys and girls could work as waiters, porters, servants, carers.
The Supreme Court however banned the detention of persons without conviction and the government had to release them".
The government thus contrived a new system to reduce the presence of Africans (who today are 38 thousand, especially Eritreans and Sudanese). "Having signed international conventions for the protection of refugees - observes Sister Azezet - Israel cannot repatriate migrants in Eritrea or Sudan, where their lives are at risk. Therefore it signed an agreement with Rwanda. Israel pays Rwanda five thousand dollars per person, plus gives 3,500 to individual migrants. The latter sign a commitment never to return to Israel. Many migrants who accepted repatriation arrived in Rwanda and there the local authorities seized their documents, money and did not grant the right to asylum. The refugees were taken to the border with Uganda from where they travelled towards Sudan, Libya and finally to Europe. Many of them died".
Who does not agree to be transferred to Rwanda will have to apply for asylum or will be expelled. "But it is impossible to apply", concludes Sr. Azezet. "Every day, dozens of people show up at government counters, but only a few are received and, in any case, they do not receive answers. By March, those who have not applied will be arrested and jailed. This time, however, in real prisons. Israel does not want Africans because it fears that immigration can undermine the Jewish identity of the country. That said, in my opinion, Israel needs African labor. There are spaces for an authentic integration and reception. It is the political will that is lacking".
In recent days over 2,000 asylum seekers have demonstrated in front of the embassy of Rwanda in Tel Aviv, against Israel's intention to deport migrants to Rwanda: "We do not want to be sold as slaves", protesters said. The story has aroused wide echo. Shaul Betzer, first official of the Israeli airline "El Al", wrote: "As a human being and as a member of the Jewish people, raised in the values of Zionism, I cannot take part in the flight that takes refugees to a destination where their chances of survival is practically zero". Another pilot added: "Refugees who already live among us cannot be rejected and sent back to their countries where suffering and excruciating death await them". (EC) (Agenzia Fides, 24/1/2018)

ASIA/BAHRAIN - "Civil inauguration" of the Cathedral of Our Lady of Arabia, in the presence of Cardinal Tagle