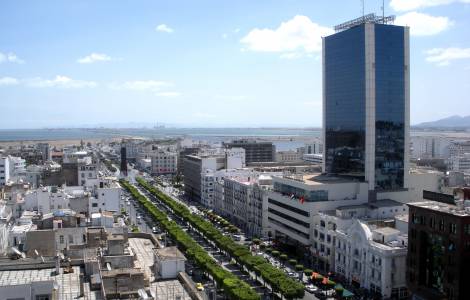 2021-10-01
Archbishop Antoniazzi: the appointment of a woman as prime minister is not just an "image campaign"

2021-07-27
AFRICA/TUNISIA: The President suspends the government and takes all powers. Archbishop Antoniazzi: "the population supports him"

2021-04-13
Appointment of the National Director of the Pontifical Mission Societies, His Exc. Mgr. Ilario Antoniazzi

2019-07-23
Appointment of the National Director of the PMS, Fr. Nicolas Lhernould

2019-06-28
"I am confident: Tunisians will be able to react with strength and courage" says the Archbishop of Tunis

Tunis (Agenzia Fides) - "There is an economic problem that then becomes social", says to Agenzia Fides Fr. Jawad Alamat, parish priest of Carthage and general secretary of Catholic schools, commenting on the recent protests that have shaken different areas of Tunisia. "The revolution of seven years ago had two demands: freedom and democracy, therefore civil and political rights, on the one hand, and social justice, therefore jobs and improvement of the general conditions of life, on the other" explains Fr. Alamat.
"On the first dossier, that of democracy, Tunisia has had an incredible development, and it can be said that it has managed to meet the expectations of most of its citizens. One thinks of the new Constitution, the recognition of fundamental freedoms, the democratic path with free elections that saw the strong mobilization of civil society. Therefore political and democratic maturity with strong distinctions compared to other parts of the Arab world have been reached", says the priest.
"However, the economic problem remains, linked not only to the local situation but also to the regional situation. Young Tunisians in these seven years since the fall of the Ben Ali regime have strongly hoped to find jobs with no results. On the contrary, the cost of living has increased, also due to the devaluation of the Tunisian Dinar, while salaries have remained low", says Fr. Alamat.
At least 778 people have been arrested in clashes with police in several Tunisian towns that took place in recent days.
"In the midst of the protests, criminal elements have infiltrated, taking advantage of the protests to loot and rob shops and public offices", said the priest. "There have been serious incidents, and hundreds of people have been wounded, including several policemen. The majority of Tunisians, however, do not want violence and looting even if they share the reasons of the protest".
After days of tension, calm seems to have returned, apart from some sporadic incidents in Siliana, in the northwest of Tunisia.
"However, other protests are foreseeable: Sunday, January 14, on the occasion of the seventh anniversary of the revolution, the day in which a major demonstration is scheduled in Tunis. The government and the institutions must therefore take on the social responsibility", concludes Fr. Alamat. (L.M.) (Agenzia Fides, 12/1/2018)