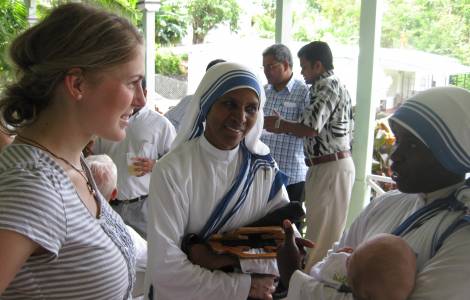 2020-06-13
In times of pandemic, the Indian Church has accompanied and supported 11 million poor and vulnerable people

Bhubaneswar (Agenzia Fides) – The Missionaries of Charity open a new home in the state of Orissa, East India. As Agenzia Fides learns, the new Mother Teresa religious community is located in the famous district of Kandhamal, which was the scene of anti-Christian violence in 2008. Thus Archbishop John Barwa, at the head of the Archdiocese of Cuttack-Bhubaneswar, refers to Agenzia Fides: "It has always been a dream to open a religious women’s community in the Parish of San Antonio, Padua, in Salimaguchha, in the district of Kandhamal. Now, after several contacts, God has listened to us and the Missionaries of Charity have agreed to open a home there".
The opening ceremony, with the blessing of the community, is scheduled for May 13, 2017, on the feast day of Our Lady of Fatima. "I would like to thank Sr. Prema, Superior General of the Missionaries of Charity, and Sr. Olivet, Regional Superior in Orissa, for having welcomed our invitation to collaborate in the pastoral ministry in Kandhamal", continues the Archbishop, recalling that it will be the third community of Missionaries of charity in that district. The other two convents are in the parish of St. Sebastian in Saramuli and Maria, and in the parish of the Mother of God in Sukananda, two other places in Kandhamal.
Interviewed by Fides, Sister Olivet explains: "We are happy to open our new home in this district. People need our service. We are committed to working for the poor and bringing the seed of the Kingdom of God in this part of the world. With the grace and mercy of God, we will do our best to stay close to the local people, curing the poor, working for the common good, strengthening the faith in God, promoting peace and harmony in the region".
The home of the missionaries will be "a light of the Gospel" in a context still marked by suffering and discomfort, injustice, poverty, and marginalization. Anti-Christian violence in 2007 and above all in 2008 caused over one hundred victims and left 56,000 without roofs. Several churches and Christian institutions in Kandhamal were damaged. (PA) (Agenzia Fides 6/5/2018)

OCEANIA/PAPUA NEW GUINEA - "Each Salesian must feel 'one' with the people": 40 years of religious presence

AMERICA/CHILE - Feast of St. Peter and St. Paul during the pandemic

AFRICA/IVORY COAST - "What will the post-Covid-19 world look like?": A priest organizes a series of radio conferences