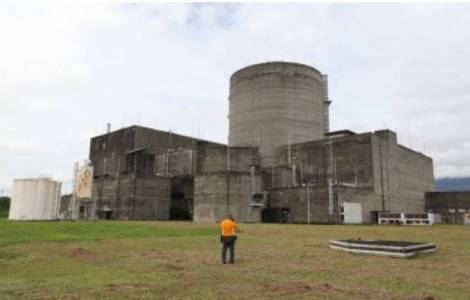 2023-01-21
The community of Bataan rejects the plan to activate the nuclear power plant: life is more important than cheap electricity

2023-01-09
Catholics celebrate the feast of the "Black Nazarene", a moment of deep popular faith

2022-12-17
Between dream and proclamation of the Gospel: Filipino migrants in the world

Balangas (Agenzia Fides) - Due to the energy crisis and the high cost of electricity, the solution is not to resort to nuclear energy, but to develop renewable energies: this is the position of a large community forum in the province of Bataan, a peninsula on the Philippine island of Luzon, facing the city of Manila. The forum opposes the project to activate the nuclear power plant built in recent decades in the province with the capital Balangas. Citizens reflect that there are high risks and costs associated with nuclear energy. While nuclear power may seem cheap by producing cheap energy, there are exorbitant costs to convert, upgrade and maintain the plant.
Msgr. Ruperto Cruz Santos, Bishop of Balanga wrote a Pastoral Letter in which, interpreting the sentiments of citizens, clergy, religious and faithful, he writes: "Because of the lack of electricity or the increase in oil prices, there are those who, once again, are carrying out the reconstruction of the Bataan Nuclear Power Plant. This is neither right nor good".
The network of associations also points out the enormous amount of nuclear waste produced every year, with all the problems of disposal, and the dangers of accidents such as those that occurred in Chernobyl and Fukushima. For this reason the Bishop remarks: "We do not want to put life on the brink of danger, and we do not want a future without the certainty of goodness, safety and beauty. We do not want our sea to be made uninhabitable for marine life, resulting in the destruction of our ecosystem. We do not want our soil to be poisoned and no longer cultivable. We do not want our livelihoods destroyed". The pastoral letter, distributed in all parishes and communities, reads: "For us, life is more important than profit or money deriving from cheap electricity".
Citing the path indicated by the encyclical "Laudato Si', the local Church feels called to "protect the creation of the Lord" and for this reason raises awareness and indicates sustainable and renewable energy sources, in particular by hoping for the experimentation of wind, hydroelectric and solar energy.
The approach to nuclear energy in the Philippines began as a response to the 1973 oil crisis, when the administration of General Ferdinand Marcos sr. decided to build a nuclear power plant comprising two 600 MWe units in Bataan.
Construction began in July 1976 and was completed in 1984 at a cost of $1.9 billion. However, due to financial problems and earthquake-related safety issues, the plant was never put into operation. Following the Chernobyl accident in April 1986, the then president Corazon Aquino decided to put the plant out of action.
Only in April 2007, the Philippine government made the final payment for the plant and started a new project to study the development of nuclear energy, as part of a comprehensive national energy plan. In 2008, an International Atomic Energy Agency (IAEA) mission stated that the Bataan plant could be renovated and operational, estimating the costs of the renovation and upgrade at about one billion US dollars.
In October 2016, the Manila government created a special body to study the implementation of the Nuclear Energy Program (NEPIO) as a long-term energy option, identifying 15 possible locations that could host a nuclear power plant in the archipelago. In February 2022, President Rodrigo Duterte signed the Executive Order 164, which mandates the Ministry of Economy to develop and implement a nuclear program in the Philippines, reconsidering the activation and use of the Bataan nuclear power plant. (PA) (Agenzia Fides, 21/1/2023)

ASIA/JAPAN - On the 10th anniversary of the Fukushima catastrophe: Catholic bishops are calling for the nuclear power plants to be closed